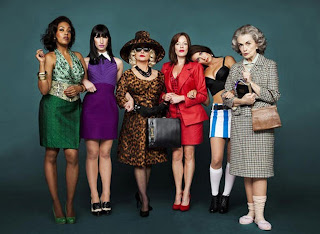 Maybe there can be too much of a good thing.  There was no show that I wanted to see more this fall than Women on the Verge of a Nervous Breakdown.  And I wasn’t the only one who felt that way. Many people, like my friend Joy, wanted to see it because they were fans of Spanish director Pedro Almodóvar's kaleidoscopic 1988 movie about a group of friends and lovers in post-Franco Madrid.  But I was looking forward to the Broadway musical version because of its cast: Laura Benanti! Brian Stokes Mitchell! Sherie Rene Scott! and Patti LuPone!!
The Lincoln Center production now playing at the Belasco Theatre is like one of those extravaganza movies from the 1950s when desperate producers packed as many stars into a film as they could, even if they weren’t quite sure what to do with all of them. Alas, that seems to be the problem here too.
Women on the Verge of a Nervous Breakdown has too many marquee-name talents and each of them obviously—maybe even contractually for all I know—has to have a big number. So the action slows down to give one to each of them, as well as to their slightly less luminary co-stars who include de’Adre Aziza, Danny Burstein, Mary Beth Peil, and Justin Guarini, fulfilling what seems to be a requirement that every Broadway musical now must have at least one former “American Idol” contestant.
This beneficence causes another set of problems because Almodòvar packed a lot of plot into his movie.  And the challenge for book writer Jeffrey Lane was to hone in on the essence of its multiple storylines. (Click here to read a piece in London’s Independent on the difficulty of the task.)

Lane squeezes in the familiar stuff from the film—the mambo-loving cabbie, the model with the Shiite terrorist boyfriend, the missed answering machine messages (this is the ‘80s) a burning bed and the gazpacho spiked with sleeping pills—but he fails to make sense of it all.  Or to make it fun.  Halfway in, I was still trying to figure out what was going on.  And I hadn’t cracked one smile.
The musical might still have worked if director Bartlett Sher had managed to transport the spirit of the film’s flamboyant zaniness onto the stage but, with one or two exceptions, he falls down on the job too. Sher keeps things moving but people don’t seem to know where they’re going.  Sometimes they’re left hanging in midair. Literally. Maybe it just took too much energy to wrangle all those idiosyncratic talents into a cohesive whole.
One exception to all this bad news is the performance Benanti gives as the airhead model Candela.  Benanti dares to turn her character into an over-the-top cartoon, which turns out to be just the kind of loopiness that would have done the whole show good.
LuPone, who plays a jilted wife, has a couple of moments too. One involves a wig.  The other comes when she simply stands center stage in a black dress and sings the hell out of a ballad called “Invisible,” which is the best number in David Yazbek’s Latin-flavored score.  Burstein brings his innate likeability to the role of the cabbie but the rest of the cast, particularly Scott, who plays the woman at the center of the maelstrom,  remains adrift.
Lincoln Center has spared no expense on the show. There are 25 people in the cast and 17 musicians in the pit (not up to the glorious standard of the 30 in the company's now-legendary production of South Pacific, but still impressive these days when the first thing producers cut is the size of the orchestra).

Michael Yeargan’s multi-faceted set uses just about every gadget in the toolkit including Sven Ortel’s frenetic video projections. Catherine Zuber has just as much fun with her extravagant, neon-colored costumes. While Charles LaPointe deserves a special shout-out for his intentionally hilarious wigs.
But no show this fall, not even the ones that closed prematurely, has gotten worse reviews than Women on the Verge.  Even the few critics who kind of liked it, like the New York Post’s Elizabeth Vincentelli, consider it a “mess.” (Click here to check out the StageGrade rundown of all the reviews).
Sometimes, of course, real folks embrace a show that the critics reject, as has happened with last spring’s even more critically reviled The Addams Family.  That might be the case with Women on the Verge of a Nervous Breakdown.  But I doubt it.

The trailer, however, is quite entertaining.  So, in the spirit of holiday giving, here it is:

Labels: Women on the Verge of a Nervous Breakdown