"The Divine Sister" is a Miracle of Good Fun 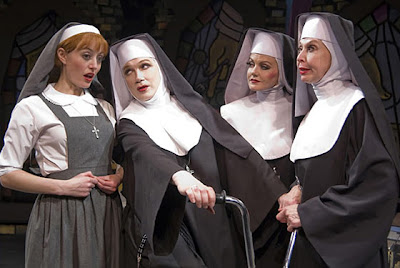 I’m not a big fan of drag and I'm not fond of camp and yet, like just about everyone else who has seen it, I had a great time at The Divine Sister.
This campfest, written by and starring that irrepressible comic genius Charles Busch as the Mother Superior of a down-at-its-heels convent, is a high-spirited send-up of Hollywood’s fascination with nuns. I hadn’t realize what an extensive genre this is until I saw the show, which is filled with winking nods to, among others, “The Song of Bernadette,” “The Bells of St. Mary’s,” “The Nun’s Story,” “The Sound of Music,” “The Trouble with Angels,” “The Singing Nun,” “Agnes of God,” “Sister Act” and, of course, “Doubt”—with a little bit of “The Da Vinci Code” thrown in for good measure.
But enjoyment of The Divine Sister isn’t dependent on your having seen any of them because Busch knows how to get a laugh. He piles ridiculous story line (the Mother Superior’s prior life as an intrepid girl reporter, told in flashbacks) on top of ridiculous story line (the dizzy young novitiate who is intent on seeing visions) on top of ridiculous story line (the mysterious mission of a nun visiting from Germany) until they all tumble over into hilarity.
The trick of high camp—and The Divine Sister's is of the highest order—is to play it, well, straight.  This cast may chew the scenery, but it does it with sincere gusto. And perfect etiquette.  There's no sloppiness here.

Busch is ably abetted in his merrymaking by co-conspirators he’s worked with over the years including director Carl Andress and the top-notch cast lead by the droll Julie Halston as the Mother Superior’s no-nunsense (sorry I couldn’t resist the pun) second-in-command and Alison Fraser, who gives a deliciously deadpan performance as the Teutonic nun. Even B.T. Whitehill’s cartoonish set is a hoot.
This show, which has been extended at the Soho Playhouse through Feb. 27, won’t change your life.  Or even give you much to talk about over dinner after the show (it only runs 90 minutes so you have plenty of time to take a short walk down Spring Street to Bistro Les Amis, a cozy spot with yummy food that's perfect for a wintry evening).  But The Divine Sister will entertain you and that, in what has been a somewhat lackluster fall season, is as welcomed as any act of Divine Intervention should be.

Thanks and please pop in again!