"A Free Man of Color" is Vivid to a Fault 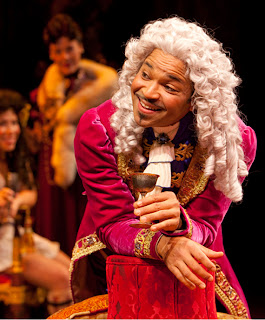 The folks at Lincoln Center Theater probably aren’t having the merriest holiday season. Over the past six weeks, they’ve opened two big shows—Women on the Verge of a Nervous Breakdown and A Free Man of Color—and both have been as warmly received by the critics as Sarah Palin would be at the White House Christmas dinner.
Audiences don’t seem all that crazy about the shows either—the houses for the performances of Women on the Verge have barely been two-thirds full and A Free Man’s have averaged around only 50%. I had problems with these shows too (click here to read my review of Women on the Verge of a Nervous Breakdown).  And yet, I think we should be celebrating the folks who run Lincoln Center Theater.
The company must have made boat loads of money on its justly acclaimed production of South Pacific that closed in August after playing to sell-out audiences for most of its 996 performances. Instead of playing it safe and scheduling more revivals, LCT did what nonprofit theater companies should be doing: it used the money to mount ambitious new shows by talented theatermakers.  Not every experiment is going to work.  But how else can people figure out what will unless work they’re given the room—and the dollars—to try something new, even if it does fail.
LCT should get extra credit for putting on A Free Man of Color.  The show was originally scheduled for the 2008-2009 season at the Public Theatre but was dropped, in part, because of the stock market crash and, in part, Guare told the New York Times, because of “artistic differences” (click here to read the complete article). Now, LCT is giving this fantasia of history, comedy and identity politics a home and it has spared no expense to do it.
There’s original music by Jeanine Tesori, scores of lavish and witty costumes by Ann Hould-Ward and an inventive set by David Rockwell that uses every inch of the Vivian Beaumont’s vast stage. The play runs nearly three hours. There are 33 people in the cast. And more ideas in the play than in a graduate-level humanities course—Napoleon Bonaparte, Thomas Jefferson and the Haitian revolutionary Toussaint L’Ouverture all make appearances and deliver thought-provoking speeches. You may not like A Free Man of Color but you’re unlikely to be bored by it.
A Free Man of Color was written by John Guare, best known for The House of Blue Leaves and Six Degrees of Separation, but the handprints of director George C. Wolfe are all over the play.  And what you think of it may well depend on how you feel about Wolfe’s style of  theatermaking—flamboyant stagecraft, heavy doses of sardonic humor and an abundant use of anachronistically modern references from Frank Sinatra to Hurricane Katrina.

Your response may also depend on your sensitivities about the issue of race in America. As often happens when Wolfe is dealing with African-American subject matter, blacks in the audience seemed to have a better time than whites.
The story opens in 1801,  right before the U.S. purchases the Louisiana Territory. It is a time, at least as this play would have it, when a kaleidoscope of ethnic groups mingled in an egalitarian New Orleans. The play’s protagonist is  Jacques Cornet,  the title character who was born to a slave mother but has inherited a fortune from his white father that makes him the wealthiest man in New Orleans.  He’s also the vainest (which is why he dresses like a Restoration comedy fop, complete with a cascading periwig) and the randiest (which is why he beds nearly all the women—of all races—in town).
Jeffrey Wright, always a pleasure to see on stage, portrays Cornet with brio and unbridled sexiness. He looks like he’s having a great time (understandable since African-American actors rarely get to play roles like this one) but his antics keep the audience at bay, which makes it hard to care as much as one should when the Louisiana Purchase causes a reversal of fortune for Cornet.
But Mos, the rapper who has now dropped the surname Def, is marvelously sympathetic and winning in the dual roles of Cornet’s manservant Murmur and the Haitian general Toussaint L’Ouverture. I found myself wondering if the play might better have been told entirely from Murmur's point of view.
Some point of view might have helped make it more successful. Even though Guare and Wolfe reportedly cut about two hours worth of material, there’s still a lot going on in this play.  Too much. It lacks the discipline and focus that might make it easier for people to digest.

Still, I’m glad they and Lincoln Center were daring enough to do it.  And that I got the chance to see it.  If you hurry, you can too; it’s playing through Jan. 9.

Labels: A Free Man of Color