"Angels in America" Soars Above Them All 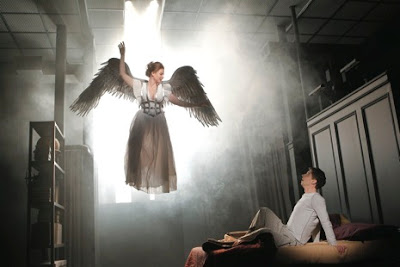 Weeks—actually months—have gone by since my theatergoing buddy Bill and I saw Angels in America, which is enjoying a sensational run at Signature Theatre as part of the company’s year-long tribute to the playwright Tony Kushner.  In fact, I’ve seen nearly three dozen plays and musicals since then and Angels in America is, hands down, the very best show I’ve seen. It’s the first one I’ve recommended whenever anyone has asked me what they should see this season. So I don’t know why it’s taken me so long to write about it here.
Maybe it’s my history with the show.  Everyone I knew was blown away by Angels in America when it first opened on Broadway in 1993.  But not me.  I thought it was OK but I didn’t get what all the fuss was about. I did have some second thoughts 10 years later when I saw the excellent HBO miniseries that was directed by Mike Nichols and starred Al Pacino, Meryl Streep and Emma Thompson.  But  it took watching this current production, the first stage revival in New York since the original, to make me realize what a truly remarkable piece of work this is.
In an article last fall, the New York Times declared Angels in America “the most influential American play of the last two decades,” and predicted that it would stand the test of time, joining the Mount Rushmore of classic American plays that includes Eugene O’Neill’s Long Day’s Journey into Night, Arthur Miller’s Death of a Salesman and Tennessee Williams’ A Streetcar Named Desire (click here to read the article). That’s probably true. I just wonder how I could have missed the play’s brilliance the first time around.  I suspect it’s because I didn’t want to take it in.
Set during the conservative Reagan years, Angels in America pivots around two unhappy couples: one a closeted gay man and his depressed wife; the other a gay man who has AIDS and the lover who abandons him. Also on hand is a third couple: the ghost of Ethel Rosenberg, who was executed for espionage in 1953, and Roy Cohn, the ruthless  attorney who persecuted her and later died from AIDS complications in 1986.
Lots of people were still dying from AIDS during the play’s run in the early ‘90s. Some of them were my friends.  And like the wife in the play, I, too, had once been in an unhappy relationship with a man whom I knew loved other men. I had even had a terrible encounter with Roy Cohn. (Buy me a drink and I’ll tell you about that one later.)  I was already living the horrors of Angels in America.  No wonder I didn’t want to see it.
But a diagnosis of AIDS is no longer a death sentence.  I am happily married to the wonderful K.  Roy Cohn is just a bad memory. And I am now gobsmacked by how, in the midst of all the old terrors, Kushner managed to capture the emotional complexities of that time (click here to read a New York Magazine profile of the playwright).

Angels in America takes on all the big stuff—politics, religion, relationships. Divided into two parts that run a combined 6 hours and 40 minutes, the play is both naturalistic and surreal, more than living up to its subtitle of “A Gay Fantasia on National Themes.”
The two parts—“Millennium Approaches” and “Perestroika”—are playing in repertory, with all day marathons on Saturdays and Sundays.  Because Bill and I attended the very first marathon, it would be unfair to say a lot about the performances, which the actors were still refining.  Except to say that Zachary Quinto is superb as the runaway lover Louis, the role originated by Joe Mantello, now one of our finest directors. 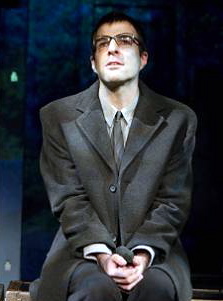 Quinto, best known for playing the villainous Sylar on the NBC sci-fi series “Heroes” and for taking over the iconic role of Spock in the 2009 movie “Star Trek,” seemed at first like stunt casting, the usual attempt to bring in a younger crowd.  Instead, he turns out to be very smart casting. For Quinto gives Louis the poignantly conflicted authenticity of a good man who knows he’s doing a wrong thing but is too weak to do otherwise. (Click here to read a NYTimes profile of the actor.)
But the biggest props have to go to director Michael Greif.  Without slighting the play's poetic language and grand metaphoric flights of fancy, he delineates the narrative, unsnarls the separate but interlocking storylines and combines them into a satisfying whole, even if “Perestroika” starts to drag toward the end. (Click here to listen to Greif talk about the casting and rehearsal process.)
My one complaint is the set design.  Angels in America is a big play set in multiple locations that are difficult to recreate on a Signature-size budget. And that’s even before the climactic moment in “Millennium” when the Angel is supposed to make a glorious scene-shattering appearance.  Set designer Mark Wendland's solution is two rolling scaffolds that are pushed around by black-clad stage hands and a curtain on which Wendall K. Harrington's video projections are shown. (Click here to read a TDF interview with Harrington and lighting designer Ben Stanton.) I wish they’d gone even simpler and just used the projections.
But that’s just a quibble.  If you love theater, you must see this production, which has now been extended through March 27.  Five of the eight cast members, including Quinto, are leaving on Jan. 30 and so it’s impossible to predict how the newcomers will change the show.  But great plays are, by definition, survivors.  And Angels in America is a great play.