"The Little Mermaid" Fails to Make A Splash 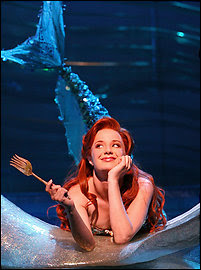 Disney was not a bad word when I was growing up. It meant "The Mickey Mouse Club," which I loved watching. It meant Disney World, which I longed to see. And it meant entering the magical worlds of feature-length cartoons like "Cinderella" and "Sleeping Beauty." So, I'm not really quite sure how Disney became a four letter word on Broadway. Beauty and the Beast, The Lion King and the restoration of the venerable New Amsterdam Theatre helped rescue Broadway and the Times Square area from the drug pushers, pimps and sex shops that dominated the neighborhood in the ‘70s. But sophisticated musical lovers complain that Disney's later shows—Aida, Tarzan, Mary Poppins—have been too bland and too mechanical. Broadway insiders gripe that the Disney corporation refuses to play by the rules, throwing its weight around in contract negotiations and its money around to buy up talent. And now, this week, nearly every major theater critic has joined in, harpooning Disney's latest show, The Little Mermaid. “Loved the shoes. Loathed the show,” wrote the New York Times’ Ben Brantley.

Alas, I have to swim with the tide on this last one. I don't think The Little Mermaid is as terrible as Brantley says but there certainly isn't anything magical about it. And it's magic you want from a fairy tale and from the imagineers of Disney. Raised expectations might be part of the problem. There have been few more magical moments on the stage than the opening of The Lion King. The Disney folks hired the experimental theater director Julie Taymor and she transformed that beloved cartoon into a wondrous theatrical experience that set a high bar for other Disney shows. For Mermaid, Disney hired the internationally acclaimed opera director Francesca Zambello, clearly hoping that she would create a similarly transformative production. I've never seen Zambello's work before but if The Little Mermaid is any indication, I don't get what the fuss is about.

The show still tells the story of the mermaid princess Ariel (the pleasant Sierra Boggess) who falls for a human prince (the equally pleasant Sean Palmer), and then defies her father (the very buff and therefore particularly pleasant-to-look-at Norm Lewis) and almost sacrifices her life for love. But the book by Doug Wright (yes, the same award winning creator of I Am My Own Wife and the book for Grey Gardens) pads the tale so much that what was once a brisk 83-minute movie is now a somewhat bloated 2 ½-hour show. All of Alan Menken and Howard Ashman's songs from the original cartoon are still there and they still delight but the new ones by Menken and Glenn Slater aren't up to the same level. Most of the imagination seems to have gone into creating an underwater world, which set designer George Tsypin and costume designer Tatiana Noginova do primarily with lots of plastic to simulate water and by having actors glide around on sneakers with wheels in their heels to affect the movement of swimming.

I went to the show with my niece Jennifer, who is now 28 but who, like me, grew up on Disney cartoons and still has the DVDs of every show that came out during the company’s second golden era of animation, which began with the release of “The Little Mermaid” in 1989. We tried to get into the mood of the evening by stopping for a quick bite before the show at Blue Fin, the seafood restaurant around the corner from the Lunt-Fontanne Theatre where The Little Mermaid is playing. But the service was spotty and the tab was ridiculously high for the salad and appetizers we ordered. Jennifer wasn't any more pleased with the show, perking up only for familiar songs like "Part of Your World," "Kiss the Girl" and, the always-buoyant "Under the Sea." "Well," she said at the end, damning the show with faint praise, "it was better than Tarzan."

The kids in the audience, and there were oodles of them at the performance we attended, seemed to enjoy the show more than we did. But they didn't display the excitement that I saw in the young theatergoers at Wicked or Legally Blonde. Maybe kids today are too jaded for the PG-attractions of a traditional Disney show. But maybe it’s just time for Disney to move on from adaptations of its old animated hits. The company seems to think so too. It is currently developing musicals based on "The Man in the Ceiling," Jules Feiffer's children's book about a boy who yearns to become a cartoonist; and "Peter and the Starcatchers," a prequel to Peter Pan by Dave Barry and Ridley Pearson. Maybe they can help restore Disney's good name.

First of all, I, too, grew up on Disney. I have made it a personal goal to buy every classic Disney movie that I loved on DVD as soon as I can feasibly afford it. Right now, I have Mulan, Little Mermaid, Lion King, and Aladdin. I want to add Tarzan, Peter Pan, The Black Cauldron, Sword in the Stone, and several others. But, I digress.

I saw the Lion King on Broadway, and I have to say it was one of the best shows I'd ever seen. Let me follow that statement with one that basically says "I haven't seen many shows on Broadway."

In fact, I've only seen Spamalot and Lion King. But again, I digress.

The Lion King was spectacular, but it still lacked some of the magic that the movie had. I hummed along with my favorite tunes, and I even enjoyed some of the new tunes, but there was still that Disney magic missing. I agree with you when you say that Disney should focus on other things.

My second comment is that I think Disney should stop with the franchises, stop focusing on sequels (or prequels) to its classic tales, and develop new ones. There are hundreds and hundreds of fairy tales and fables that they could turn into feature-length, musical, classical movies a la The Little Mermaid. Why keep harping in the same franchises? Do new stuff, Disney!

Director, thanks for your comments. I thought when I first saw your name that you might be the show's director Francesca Zambello but I take it from your comments that you're not. You do seem, though, like someone who is smart about what they see and so I hope you will see more musicals and plays. And, in the meantime, I hope you will continue to read Broadway & Me and to comment about what you see here.

Jan, I agree with you on two major points: the show is not as bad as Brantley says it is, but it does suffer from a lack of Disney magic.

And what is Disney if not magical?