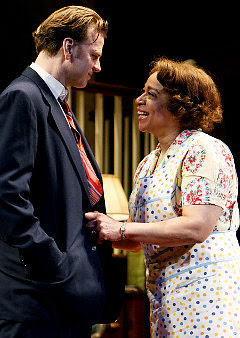 Casting can make or break a show. And back in 1950, nearly everyone agreed that the casting was the best thing about Come Back, Little Sheba, William Inge’s drama about the unhappy marriage between Lola, a childish woman, and her alcoholic husband Doc. The play, Inge’s second and his first to make it to Broadway, was admired for taking on then-taboo subjects like premarital sex, domestic violence and substance abuse. But it also exhibited all the shortcomings of a novice playwright—heavy handed metaphors, long expository speeches and narrative-turning coincidences. “Come Back, Little Sheba for all the true and touching things it has to say is on the whole much less satisfactory than it ought to be,” wrote the New Yorker critic Wolcott Gibbs. But both the critics and the public loved the shattering performances Shirley Booth and Sidney Blackmer gave as the mismatched couple. Both actors won Tonys and Booth went on to win an Oscar for the movie adaptation.

The casting is also what makes the Manhattan Theatre Club’s new revival of Come Back, Little Sheba stand out. Although, alas, not as much as it could have. The play’s symbolism is still obvious, its speeches, particularly in the slow-moving first half, are still too explanatory and nowadays, the subjects it explores aren’t new territory but well-trod ground. The result is that the show comes off as dated. Still, several critics including Ben Brantley in the New York Times and Terry Teachout in the Wall Street Journal have praised the production (click here to see a brief excerpt). But the public response seems less favorable. “I can’t stay awake,” a woman sitting behind my husband K and me confided to her husband during intermission. “They said this was going to be good and fresh but it wasn’t,” a man walking out of the theater in front of us griped to his friends. "It felt like homework," a friend told me the next day.

K and I were disappointed by the old-timey quality too. But what is fresh about the new production is its colorblind casting. S. Epatha Merkerson, who is black and best known for her 14-year run as the tough lieutenant on TV’s “Law & Order,” plays Lola; and the stage stalwart Kevin Anderson, who is white, plays Doc. Merkerson, an expert actor who usually plays strong women, works hard to portray the fragile Lola and almost pulls it off. Anderson doesn’t quite get all of Doc’s sadness but nails his anger. They might have been even more successful if director Michael Pressman had seized the opportunity to explore the tensions that the actors' racial differences would bring to a marriage like Lola and Doc’s. There are one or two nods in that direction. The one person Lola feels she can call for help in an emergency is played by Keith Randolph Smith, the only other black member of the cast. But without changing a word of the play, Pressman might have delved deeper, pushed his actors further and come up with a reinvigorating subtext for a play that never seems to have had one. Instead, while there are some affecting moments, the evening was, at least for me, largely colorless.

Colorblind casting is great when it opens up opportunities for actors to play parts they might not have been considered for in an earlier time. But it shouldn’t mean that directors and actors are blind to the different shadings that race can bring to those roles. In April, Morgan Freeman and Frances McDormand are scheduled to star as another unhappy couple in the Mike Nichols-directed revival of Clifford Odet’s The Country Girl. Unlike Sheba, which maintained its original 1950s setting, the new production of Country Girl is reported to be set in the present. I'm keeping my fingers crossed that it will also use the incredibly wonderful casting of Freeman and McDormand to explore contemporary attitudes on race.

I was wondering if you saw "110 in the Shade?" I really enjoyed it, and I thought that was a case where colorblind casting worked fine. I guess you have to suspend disbelief a bit, and not think about the likelihood of a multiracial family and interracial relationships at that time and place in American history. But since the play wasn't about race, I just kind of accepted it. I had no problem believing that John Cullum and Audra McDonald were father and daughter. I guess you could say it presented some of the same issues as Come Back Little Sheba, which I haven't seen.

Thanks for reminding me about "110 in the Shade", Esther. I did see it, enjoyed it and blogged about it too. And although I did think about that family's racial dynamics as I watched the show, I don't think race always has to be the issue when colorblind casting is used. But there are times when acknowledging the difference can add something extra to a production and I think "Come Back Little Sheba" was one of those.

Jan, I completely agree with you and your assessment on color blind casting. Not every show need have a subtext to be believable, but a period piece ought not to whitewash the relevance of historical facts, either.

And like you, I'm keeping my fingers crossed on The Country Girl.

I haven't seen this yet and intend to. I am basically color blind at all times. If someone can play a part in a story that doesn't have anything to do with race then it shouldn't matter the color of their skin. It is unnerving when you realize that it does matter to people though. I saw Chita's "A Dancer's Life" with a young white woman who was upset that Chita's stage "family" were not all Latino. Huh? Their race had nothing to do with it since they were just cast as dancers, I attempted to explain to her. It ruined the show for her. When I saw "110 in the Shade" for the second time, I was sitting in front of some ladies from Long Island who were subscribers. One of the women was very upset that a black woman would dare to play that role. She was very verbal about her opinion during the intermission. I am still upset that I didn't confront this woman. Her friends were obviously embarrassed and well they should be. Racism is alive and well even in the theatre, which is comprised of probably the most open and accepting people in the universe.

I would submit that it is not racist to see race.