A Stellar Crew for "The Seafarer" 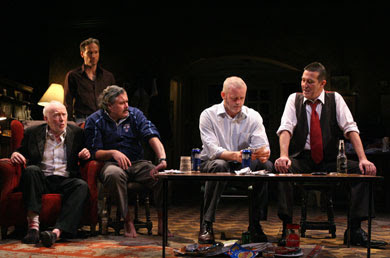 If there were a Tony Award for Best Ensemble (and why isn't there one?) it would be the most competitive race this Broadway season. The frontrunner probably would be the Steppenwolf gang from August: Osage County. And not far behind would be the merrymakers of Is He Dead? and the lethal quintet in The Homecoming. But I'd cast my vote for the brilliant band of actors in Conor McPherson’s The Seafarer. The cast—Jim Norton, Conleth Hill, Sean Mahon (standing in the photo above), David Morse and Ciarán Hinds—is listed alphabetically in the Playbill, the actors come out together for the curtain call and it's hard to set a hierarchy on their uniformly superb performances. Like the members of a crew team, each man grabs his oars and, working together as a single unit skillfully steered by McPherson who directs his own play, they transport the audience into an engrossing evening of theater.

It's a particularly impressive feat because their vehicle, the play with its fanciful twists, isn't quite as sturdy as one might hope. Like The Weir and last season's Shining City, The Seafarer is another one of McPherson's ghost stories. The Dublin-born playwright has the Irishman's love of a good yarn and he is a great raconteur. But at the end of each of his plays I've seen, I found myself asking, So what was that about? The critics, whose reviews I'd saved and read when I got home, also seemed confused by The Seafarer's meaning and divided on whether or not it was a really good play or just a good time.

At its simplest, The Seafarer is about a ne'er do-well (Morse) who returns home during the Christmas season to take care of his brother (Norton) who was blinded when he got so drunk that he fell into a dumpster. Two local friends (Hill and Mahon) drop by and a mysterious man (Hinds) whom one of them met at a local bar joins the group. There is much drinking, much storytelling some gambling (metaphorical and literal) and inquisitions into the meaning of good and evil, the nature of heaven and hell. Souls are imperiled and salvation is sought. There are also lots and lots of laughs. The great actor Brian Dennehy was sitting in front of my friend Bill and me and he laughed so hard that he doubled over at times, a good thing since he's a huge man who, at times, blocked Bill's view.

You wouldn't know this just from watching the play, unless maybe you were a particularly wonky English major in college, but I learned from the articles and reviews I read afterwards that the title of the play apparently refers to an old English poem of the same name. And even a quick perusal of the poem seems to provide some clues as to what McPherson may be getting at. "Death leaps at the fools who forget their God," goes one line (click here to read the entire poem).

It's odd when you think about it but religious faith isn't often the subject of a Broadway show. A photo of Jesus hangs on the back wall of The Seafarer’s set and right at the start of the play, the returning brother almost absent-mindedly lights a small votive candle in front of it. The flame seemed to flicker on and off throughout the performance Bill and I saw. I don't know if that was intentional or not but right before the final lights dimmed, it glowed.

Labels: August: Osage County, Is He Dead?, The Homecoming, The Seafarer

Thanks for your very helpful link to "The Seafarer" poem, which I was too lazy to seek out myself. Two points, however: 1) Even after reading through the poem, pretty carefully, twice, and after consulting the very helpful analysis of it in Wikipedia, I still don't really understand the reason that McPherson chose it as the title of his play. And 2): Why, I wonder, doesn't the Playbill itself print the poem, or at least make reference to it, given the poem's obscurity and its seemingly esoteric connection to the play?

I think the flickering light was intentional. It went out when Mr. Lockhart made his entrance, and immediately came back on when he made his exit near the end.