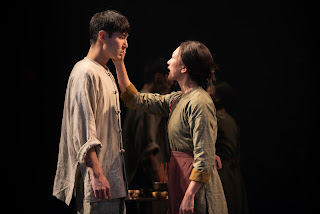 The Harold and Mimi Steinberg Charitable Trust announced this week that it is awarding its $100,000 Mimi Award to two mid-career playwrights: James Ijames and Lloyd Suh. I’m pleased for both of them but I’m particularly delighted for Suh, who has been writing plays for two decades but whose work I only discovered this year (shame on me) but have fallen hard for (better late than never).

Suh’s The Chinese Lady had a six-week run at the Public Theater last spring. His imaginative retelling of the real-life story of the first Chinese woman to come to the U.S. back in 1834—she was put on display and people paid money to gawk at her—was both enlightening and entertaining (click here to read my review of it).

Now with The Far Country, which is running at the Atlantic Theatre through the end of the year, Suh has turned his gimlet eye on another overlooked part of the Chinese-American experience:          the practice of “paper sons.” It's terrific too.

When the Chinese Exclusion Act of 1882 barred most Chinese from entering this country, would-be immigrants got around the ban by pretending to be related to the Chinese who had come here earlier to seek their fortunes during the Gold Rush or to provide labor for the building of the transcontinental railroad and had over the years been granted legal residency.

The newcomers—the paper sons trying to enter the country under false pretenses—often borrowed hundreds of dollars to pay for these phony relationships and spent years paying off those debts, sending money back home to help the poor relatives they left behind and mourning the loss of their true identities.

The practice continued until the immigration laws were reformed in the 1960s. A close friend of mine is the son of someone who came into this country that way (click here to listen to his story and some others) and so I was particularly keen to see what Suh would do with the story.

The Far Country opens in 1909 in an interrogation room on Angel Island, the detention center that was a harsher west coast version of Ellis Island where immigrants were screened. The time is three years after the San Francisco earthquake and a laundryman named Gee is trying to convince an immigration official that he’s a citizen whose records were lost during the quake.

He isn't; they weren't. But he insists he's telling the truth and that he only wants to visit his family in China and bring his oldest son back with him to help build up his laundry business. And Gee knows how to ingratiate himself with the white men in charge by bowing and smiling and pretending that his English is worse than it is.

Gee gets his papers and when he gets to China, he starts looking for a paper son who will pay him the money and provide the indentured labor his business needs. He finds Moon Gyet, a young man who is the only support for his poor widowed mother.

Moon Gyet’s entry into the country isn’t an easy one. His stay on Angel Island, crammed into cells with others for months on end, and his agonizing efforts to convince officials there that he should be allowed into the country provide the play’s most effective demonstration of what many Chinese people endured to become Chinese-Americans.

Still, Suh and director Eric Ting are occasionally too pedantic: sometimes stopping the narrative for direct-address history lessons and at others, showcasing video projections that hammer home parallels with the ongoing discrimination against Asian-Americans.

But they are saved by the importance of the underlying message, the lyricism of Suh’s language and by this production’s all-around excellent cast, particularly Jenn S. Kim, Shannon Tyo (who was also great in The Chinese Lady) and most especially Amy Kim Waschke as Moon Gyet’s mother, who more than anyone else acknowledges the emotional and cultural costs of becoming a paper son in an unwelcoming land.

Despite the open-arms image it likes to claim for itself, America has long had an ambivalent relationship with immigrants dating from the Alien and Sedition Laws passed in 1798 and running right through the way that Governors DeSantis and Abbot are treating asylum seekers today. The final scene of The Far Country is a poignant and important reminder that despite the hardships they may face getting in, immigrants to this country often become its most devoted citizens and the ones who truly make America great.