How Broadway's "KPOP" Lost Its Mojo 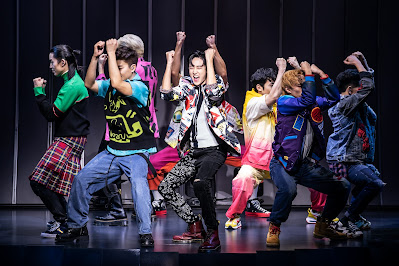 The world of musical theater is divided right now between the people who saw KPOP before it came to Broadway and those who saw it afterward. I sadly fall into the latter group.

The original production back in 2017 (the one that gives its attendees bragging rights) was an immersive theater piece, a joint production of Ars Nova, Ma-Yi Theater Company and Woodshed Collective that staged its scenes over several floors of the A.R.T./New York Theatres building on West 53rd Street. It was such an instant hit that it sold out before I could get a ticket.

So as soon as I heard it was coming to Broadway this season, KPOP shot right to the top of the list of shows I most wanted to see. But the production that opened this week at Circle in the Square isn’t the show that it once was. That’s because all the action now has to take place on one stage and to accommodate that, the creative team has reconceived the plot.

The conceit for both versions is supposed to be a peek behind the scenes at the music factories that have made K-pop—a fusion of traditional Korean folk music, contemporary pop, hip-hop, and R&B—so successful that acts like the South Korean boy band BTS and girl group Blackpink now regularly top the U.S. charts.

The real-life story of South Korea’s decades-long campaign to build up and export its cultural products offers plenty of material for book writer Jason Kim, composer and lyricist Helen Park (the first Asian-American woman to compose a Broadway score) and co-lyricist Max Vernon to work with (click here to read about that history).

And from everything I’ve heard and read, the 2017 version tried to grapple with some of the industry’s most controversial issues, including the relentless drive to perfect the highly-choreographed routines that have become trademarks of the genre; the continuous threat that performers are interchangeable and can be replaced in those manufactured acts by younger versions of themselves as they age; and the pressure to undergo plastic surgery to make the stars more acceptable to western eyes.

Almost all of that is missing in the current production. Instead, it’s loosely—very loosely—centered around the preparations for one factory’s debut presentation of its major acts in New York. Its boy band members are bickering because a Korean-American has replaced one of the longtime members and seems to be getting more media attention than the others. And the girl group members are worried that anything they say to a filmmaker following the group around will jeopardize their chances to breakout.

Meanwhile the star is having a meltdown because she doesn’t know if she really wants to pursue international stardom or to settle down with her modest school teacher boyfriend. The role is usually played by the real-life K-pop star Luna but she was out the night my theatergoing buddy Bill and I saw the show. Her understudy Amy Keum turned in a solid performance but I couldn't help wondering what extra spark Luna, who's also done musicals (she played Elle Woods in the South Korean production of Legally Blonde) might have brought to the part.

All of the young cast members, most of whom are making their Broadway debuts, work hard but their characters' storylines are so thinly drawn that it was hard to connect with any of them. And director Teddy Bergman seems at a loss for how to help them make the narrative more compelling. Instead he leans on his creative team to do the heavy lifting. They do what they can.

Gabriel Hainer Evansohn has designed a flexible set with telescoping platforms that provide music-video-style close-ups of the performers and trap floors that allow them to appear and disappear as needed. The setting is assisted by a kaleidoscope of video projections, including live feeds from the stage that pop up on the TV screens that surround the set. But the most valuable contribution may be Jiyoun Chang’s dynamic lighting scheme which does a better job of storytelling than the actual book does.

And of course Bergman leans heavily on the music. In between the scenes of faux angst, the cast performs numbers that are supposed to be for the fictional show but that actually make up the bulk of the show that audience members at Circle in the Square see.

As in real K-pop, some of the songs are sung in English, others in Korean and a few toggle back and forth between the languages. Most of the numbers, with the exception of the requisite power ballads, are upbeat and bouncy.

All are energetically choreographed by Jennifer Weber (click here to read more about this up-and-comer) and they feature delightfully gaudy costumes by Clint Ramos and Sophia Choi who come up with so many variations on boy-and-girl-band glamour wear that those outfits almost deserve a show of their own.

In the end, your enjoyment of KPOP will probably depend, unsurprisingly, on how you feel about K-pop music. Two elderly white women in our row could hardly wait for the lights to come up at intermission before they made their way for the door. But the young Asian couple sitting next to me could hardly contain their joy, bouncing along and clapping to almost every song.  As for me, I now wish even more that I had seen the 2017 version.

I am trying to contact you in regards to criticism to a musical, Book of Mormon, which Parker and Stone plagiarized...

I don't expect you to believe me but I'd still like to tell you some things regarding your accusation that it is racist.

I can always be reached at broadwayandme@gmail.com