Succumbing to the Charms of "& Juliet" 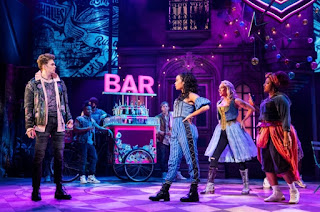 & Juliet, the exuberant new musical that mashes up Shakespeare’s Romeo and Juliet with the songbook of the pop hitmaker Max Martin wasn’t made for me. It was made for the tween girls sitting behind my niece Jennifer and me who clearly identified with the show's eponymous heroine and spent the intermission debating the choice they wanted her to make. Their consensus: reject all romantic options and go off on her own.

The show was also made for the fortysomething-year-old guy sitting next to me who nodded fiercely to the bops and sighed deeply at the power ballads that Martin (click here to read more about him) has written over the past 30 years for the likes of Arianda Grande, Katy Perry and the Backstreet Boys and that no doubt provided the coming-of-age soundtrack for both my seatmate and my niece. Cause Jennifer loved the show too.

But don’t worry if you don’t fall into either Gen X or Gen Z because there’s a good chance that you’ll still have a good time at & Juliet. To my (Boomer) surprise, I did even though I have only a passing knowledge of Martin’s songs and found all kinds of holes in the show’s jerry-rigged plot.

Written by David West Read, an executive producer of the cult TV comedy series “Schitt’s Creek," (click here to read more about him) & Juliet starts with Shakespeare’s wife Anne Hathaway turning up at the premiere of his tragedy about the star-crossed young lovers and proposing a rewrite in which Juliet not only lives but embarks on a journey of self-discovery, accompanied by her devoted Nurse and—since this is a 21st century gloss on the 16th century—a nonbinary best friend named May.

They head off to Paris because, well why not. There they encounter a confused young nobleman who woos Juliet in an attempt to prove his manliness to his macho father, who, as it so happens, has a romantic past with the nurse. Complications ensue. All of them underscored—and overscored—by nearly 30 of Martin’s hits.

But this is a jukebox musical that doesn’t take itself too seriously (it even opens with a jukebox sitting onstage) and everyone involved is far more committed to getting as many people as possible leaving the theater with smiles on their faces.

So the plot’s silliness is intentional. The Shakespeares quibble over who should hold the quill that somehow gives them control over the narrative they're supposedly writing. Anne wants to take it in a feminist direction; Will tries to circle back to the original version. Meanwhile Read throws in winking references to the real Bard that are just knowing enough to make audience members feel smart when they notice them.

The creative team is onboard too. Costume designer Paloma Young dresses the cast in a stylish mix of Elizabethan and contemporary wear that wouldn’t look out of place at a cool downtown club. Video designer Andrzej Goulding and lighting designer Howard Hudson join forces to create eye-dazzling effects that would do a rock concert proud. And director Luke Sheppard and the show's very busy choreographer Jennifer Weber (click here to read about her) keep the action moving with actors break dancing and tumbling across the stage, dropping from the ceiling and flying into the rafters.

But the highest praise has to go to the fantastic cast, led by Lorna Courtney, a charming triple threat—singing, dancing, girl powering—who's making her Broadway debut as Juliet. And just as appealing are Broadway vets Stark Sands as the Bard, who's trying to wrench his play back from his wife without wrecking their marriage; and Betsy Wolfe feisty and slyly funny as Anne.

In supporting roles, Melanie La Barrie is an inveterate scene stealer as the nurse (it’s also great to see a round, brown woman in a musical who isn’t required to sing a gospel number) and in the role of the noble dad, Paulo Szot (a Tony winner for the 2008 revival of South Pacific) is clearly delighted at being in on all the antics, including the wearing of a huge codpiece.

Now, this is the spot where I should throw in some pun on one of Martin’s lyrics but I’m not familiar enough with the songs to do that. Instead, I’ll sum up my thoughts about his show with a quote form the latter-day bard Stephen King, “You can’t deny laughter; when it comes, it plops down in your favorite chair and stays as long as it wants.”  For & Juliet, that stay should be a long one.