Digging Deep Into Empathy With "Downstate" 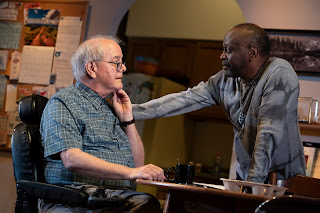 Bruce Norris has a knack for making people uncomfortable.  His 2006 play The Pain and the Itch featured a 4-year-old with a genital rash, a metaphor for her family’s dysfunction that called for the young actor playing the part to scratch her crotch constantly which caused some theatergoers to accuse the play of child abuse. His 2010 Pulitzer and Tony winner Clybourne Park took on the issues of race and wokeness in a riff on Lorraine Hansberry’s A Raisin in the Sun that so riled some black members of the theatrical community that several wrote plays to refute it (click here to read about one of them). And now comes Downstate, a provocative meditation on remorse, righteous anger and retribution set in a halfway house for sex offenders.

All three of those plays also contain scenes and exchanges that are laugh-out-loud funny. Which of course only adds to the discomfort of engaging with them. So you can understand why I shifted around uneasily in my seat at Playwrights Horizons where Downstate is currently scheduled to run through Dec. 11. But when I got home, I couldn't stop thinking about the play and the moral quandries it poses.

Downstate opens in the middle of a conversation between an old guy in a motorized wheelchair and a couple in theirs 40s who might be paying an obligatory visit to an older relative in a nursing home, except that a few lines in, the husband Andy calls the old guy “a fundamentally evil person” and describes how he has fantasized about killing him.

For the old guy, whose name is Fred, is a former piano teacher who sexually abused Andy when he was 12. Fred now lives in a group home with three other offenders: Dee, a former dancer who when he was in 30s carried on a two-year sexual relationship with a teenager during a national tour of Peter Pan; Felix who committed incest with his young daughter and Gio who had sex with an underage girl who he swears told him she was 18.

They’ve all served their sentences but they’re still required to wear ankle bracelets that track where they go. They’re forbidden to have smartphones or any access to the internet. And a probation officer regularly monitors their activities and updates them on changes in their restrictions, including the latest that prohibits trips to a nearby supermarket because neighbors, who sometimes throw things at the house, have complained that the store is too close to a school.

Norris digs into each offender’s story, giving each man a chance to say why he believes he's a victim too. And although he’s a little less generous to Andy and his wife, Norris also allows them to make the case for how being abused can have long-lasting effects on the life of people struggling to survive that abuse and those who love them.

Under the deft direction of Norris’s frequent collaborator Pam MacKinnon, the performances are all superb. But first among equals are Frances Guinan and K. Todd Freeman.

Guinan astutely nails how Fred both acknowledges responsibility for his crimes and yet desperately invests in the belief that he's really just a genial guy with a minor flaw. Meanwhile, Freeman adds layers of nuance to the role of Dee who insists that he’s done no wrong but knows that absolution will remain out of reach.

There are no easy answers to the questions their situations raise. Should people who have paid their debt to society be allowed to go on with their lives?  Sure. Would I want people who have committed such predatory crimes to live anywhere near me or those I love? Absolutely not.

Those of us who consider ourselves theater people like to talk about empathy. In Downstate Norris challenges us to confront exactly what that takes. “I feel compassion for those who’ve fucked up their lives,” he told Chicago Magazine when the play premiered at Steppenwolf in 2018. “If you want to extend compassion in the world, you have to extend it to everyone, not just to those you think deserve it.”