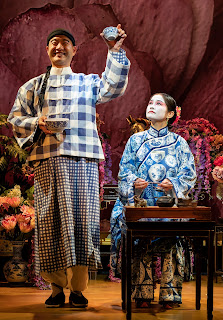 There are so many things to admire about Lloyd Suh’s The Chinese Lady which is currently running at The Public Theater through April 10.  And here are just a few of them.

ADMIRATION #1: The Chinese Lady tells a fresh story.  A co-production of The Barrington Stage and Ma-Yi Theater companies, this two-hander is inspired by the life of Afong Moy, who is believed to have been the first Chinese woman to come to the U.S. back in 1834, and it puts the spotlight on a part of American history that has too long been overlooked.

Fewer than 300 Chinese were living in the U.S. when the importer brothers Nathaniel and Frederick Carne worked out a deal with Moy’s father that allowed them to bring the 14-year-old to New York because they thought her presence would help promote the Asian goods they were trying to sell to the public.

They displayed her in a room decorated with Chinese objects and charged people to watch as she sat dressed in traditional garments, ate with chopsticks, performed a tea ceremony and—the real crowd-pleaser—took small steps around the room on feet that had been traditionally bound to produce the tiny appendages that were then considered objects of beauty in China.

ADMIRATION #2: The Chinese Lady tells a story we really need to hear right now. Suh slyly turns Moy’s 30-year career as an object of exoticism into a poignant meditation on how Asian people, particularly Asian woman, have been othered in this country from the very beginning of their time here.

He, director Ralph B. Peña and video projection director Shawn Duan also insert other bits of Chinese-American history throughout this 90-minute production, reminding theatergoers of—or maybe introducing them to—the discriminatory acts that were committed against the Chinese, ranging from lynchings and massacres to the enactment of laws that limited their immigration into this country until as recently as the 1960s (click here for more of that history).

This is all sadly relevant right now because this month marks the first anniversary of the Atlanta shootings in which a young white man targeted salons run by Asian woman and killed six of them.

In fact, between March 2020 (when former President Trump started calling the coronavirus “the China virus”) and December 2021, more than 10,000 hate incidents against Asian Americans and Pacific Islanders were reported and 70% of them were directed at women, according to the organization Stop AAPI Hate (click here to read more about that).

And the violence hasn’t stopped. In January an Asian woman named Michelle Alyssa Go was killed when she was pushed in front of a train at the Times Square subway station. Earlier this month another white man conducted a scary two-hour spree in which he randomly assaulted eight Asian women in the city. And even during previews of The Chinese Lady, an Asian dancer was assaulted on his way to perform at the Public (click here for more on all of that).

ADMIRATION #3: The Chinese Lady tells a highly entertaining story. Despite the shameful legacy of past and current abuse, Suh generously leavens his play with humor, much of it delivered by the show’s second character Atung, who serves as Moy’s attendant, interpreter and more.

Both Daniel K. Isaac who plays Atung (click here to read a profile about him) and Shannon Tyo who plays Moy have to walk a tightrope as they balance their performances between acknowledging the stereotypes that have long been assigned to characters like theirs and revealing the complex people who have always existed behind those facades.

The final scenes of the play go on a bit too long but to say that these two excellent actors do an admirable job would be a gross understatement.

ADMIRATION #4: The Chinese Lady is being told to an audience that really should hear this story. One of the things I most admire about this show is that it is being done at the Public.

Ma-Yi, a company dedicated to promoting new works by Asian-American playwrights, first produced The Chinese Lady in 2018 and although it earned great reviews from those who saw it, that production isn’t even listed in the database of off-Broadway shows run by the Lortel Foundation.

I’m not badmouthing the foundation because I didn’t go see the show back then either. It’s too easy—even for people like me who see lots of stuff and like to think of ourselves as being inclusive—to overlook shows by small companies, particularly small ethnically-specific companies.

I’m not proud of this track record but I am grateful that the Public is providing a chance for people like me to see the kind of excellent work that we’ve been missing out on. The Chinese Lady's run is now completely sold out but if this is an example of the Ma-Yi’s work, we should all keep an eye out for what it does in the future.

This show sounds powerful both in its premises and performances. More, please!

Hey Sid, it is powerful—and entertaining too, which, as you know, is a neat but difficult trick to pull off.