"This Space Between Us" Needs More Filling 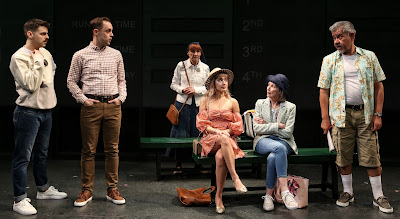 There are so many themes—cultural assimilation, filial responsibility, sibling rivalry, climate change, animal cruelty, homophobia—packed into This Space Between Us that this new dramedy, which opened this week in a Keen Company production at Theatre Row, could be interpreted as about almost anything you want it to be about.  Which isn’t actually a good thing.

At the center of it all is a 34-year-old guy named Jamie. He’s a successful corporate lawyer. He has a loving marriage with his magazine editor husband Ted. His working-class Cuban-American dad and Anglo mom adore him.  As do his Asian-American BFF Gillian and his mother’s sister Pat who is a nun.

And yet, Jamie isn’t happy.  He thinks he should be doing more to make the world a better place and so in the opening scene he announces that he’s quitting his job and going to work for a nonprofit that does good work in Africa. No one in his relationship bubble, except maybe his nun aunt, thinks this is a good idea and they spend the rest of the play acting out on their concerns.

I think playwright Peter Gil-Sheridan wants to look at what it means to be a good person in these complicated times in which we live. And that raises all kinds of questions since most of us like to think of ourselves as good people.

Among those questions is whether it's O.K. to use outdated language as Jamie’s father does when referring to Gillian or Ted as long as his heart is in the right place and his own circle of friends is diverse.  Or if Ted’s sustainability-driven veganism makes up for the blatant materialism of his buying things like Cartier watches.

And where does the white savior complex fit into all of this, especially when the people purportedly being saved engage in bad behavior of their own?

Unfortunately, Gil-Sheridan doesn’t spend much time pondering any of this. Instead, he peppers his script with quips and wisecracks and other distractions like an extended hospital scene in which Ted’s HIV status is revealed and then never referred to again.

The cast is game but director Jonathan Silverstein doesn’t offer them—or us in the audience—much help. Most of his energy seems to have gone into choreographing the busy scene changes in which the actors cart furniture on and off stage to establish the various locales including a race track, Jamie and Ted’s living room, Jamie’s office and, of course, that hospital room.

My blogger friend Jonathan Mandell said in his review that the show was "more well-meaning than well-put together" (click here to read his full review) and I sadly agree with him. Afterall, as the show itself says, to create something good in the world you need more than good intentions.

Labels: This Space Between Us