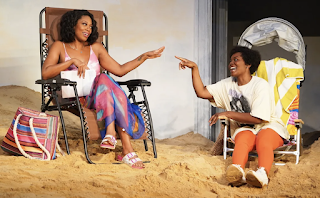 The playwright Charly Evon Simpson had written a bunch of stuff before she got her breakthrough three years ago with Behind the Sheet, a devastating drama about how the father of American gynecology callously conducted experiments on enslaved black women to try out his pioneering techniques, many of which are still used today.

The play earned Simpson the kind of attention all young playwrights yearn for and yet when I interviewed her for my podcast "Stagecraft" (click here to listen to that) she admitted to being uneasy about profiting from the pain of black people. So I totally get why her new play sandblasted, which opened in a WP Theatre production at the Vineyard this week, aimed to be a comedy.  But, I’m sad to say, when I saw it, I found too little to laugh about.

Sandblasted is a self-consciously absurdist piece whose premise is rooted in the idea that black women are literally falling apart. Within the first 10 minutes, the arm of one of its characters falls off. This metaphorical amputation is supposed to be simultaneously shocking and funny.  And it kind of is but then Simpson doesn’t seem to know what to do with it after that.

The temporarily one-armed woman (she finds a way to stick it back on) is Odessa who is at a wellness retreat where she meets and testily bonds with Angela, who is also seeking a way to deal with the mysterious malady that is besetting black women. The place is owned by Adah, an older black woman who has become an Oprah-like celebrity guru because she appears to be effortlessly holding on to her body parts.

Now here's where I should give you some sense of the play’s narrative or moral but I can’t because there really isn’t one. Although Simpson clearly wants to comment on the crippling pressures that racism and sexism put on contemporary black women, she keeps digging around in the absurdist toolkit and in the process diminishes the pain those stresses can cause.

So instead of a clear storyline, we get lots of unnecessary—and confusing—time shifting, a few long-winded monologues and a couple of overt nods to Samuel Beckett. Sandblasted opens with the women buried in sand (hello Happy Days) and most of the rest of it involves their waiting around for something to come and cure their existential ills (hey there Waiting for Godot).

I’ll confess that absurdist plays aren’t really my cup of tea. But I have enjoyed—and sometimes have been transported by—the works of Beckett and Edward Albee and Eugéne Ionesco. What distinguished their plays for me is that those playwrights set a clear theatrical grammar for their work and then spun poetry within it.

Simpson is a talented, and even poetic, writer but her grammar is loosey-goosey.  Angela and Odessa too easily shift between determination and resignation. Angela's brother appears out of nowhere and then vanishes right back into it.

And the play gives me no idea of whether I should regard Adah as a shaman or a charlatan. Even the self-consciously lower-cased “s” of its title seems to be straining for a post-modern relevance that the play can’t figure out how to develop.

That places a lot of burden on the director Summer L. Williams and her actors.  And they work hard to carry it. Maybe a little too hard.

Marinda Anderson who plays Odessa and Brittany Bellizeare who plays Angela are engaging performers but, given such opaque characters, they tend to fall back on the sassiness that has become shorthand for the way black women are supposed to interact with the world but that I, a black woman, so seldom use in real life and am tired of seeing on stages.

Most of the critical praise has been directed at Rolonda Watts, a longtime TV news personality here in New York who plays Adah. She, too, works hard (and looks great) and she gives the show some grace notes, particularly at the end.  Alas, I'm just not convinced it earns them.