"Tina, The Tina Turner Musical" May Not Run Deep, But Its Sensational Star Soars High 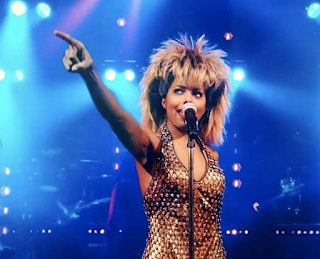 In the old days, when tickets were cheaper, people went to musicals for the thrill of hearing new songs. Today, when seeing a Broadway show can cost more than a car note, they go for the security of hearing ones they already know.

Hence the popularity of revivals and jukebox musicals that allow Baby Boomers and Gen X-ers who grew up with the cast albums of Golden Age musicals in their homes and the sounds of pop, rock and soul on the radio to feel that a Broadway show is giving them their money’s worth.

I suspect they’re going to feel that Tina, The Tina Turner Musical does that. Which wasn’t always a given. This is the third big Broadway musical to center on the life of a disco diva and her struggle to be her own woman. But neither Summer: The Donna Summer Musical nor The Cher Show lasted even a year.

Upping Tina’s risk factor is the fact that the Tina Turner songbook isn’t even as big as those of the others: you got “Proud Mary,” “River Deep, Mountain High,” “Private Dancer” and “What’s Love Got to Do With It;” then it kind of runs out of recognizable tunes. For it wasn’t so much the songs Turner sang that made her famous, as the way she performed them, sexily growling their lyrics and shimmying to their melodies.

Luckily, what people who like jukebox musicals really like is the encore that interrupts the curtain call, just after the entire cast has taken its bows, and breaks out one more rousing number. And Tina has a great encore.

Adrienne Warren, in a sensational star-making performance, transforms the encore into a mini-version of a Tina Turner concert, complete with Mick Jagger-style prancing across the stage at the Lunt-Fontanne Theatre and other tail-shaking dance moves, all done on dizzyingly tall spike heels.

By its end, she has the crowd cheering, boogying out of the theater and forgetting the uneven show that came before. But as great as she is, the show could have been so much more.

But the musical’s book, awkwardly credited to playwright Katori Hall “with Frank Ketelaar and Kees Prins,” is hobbled by its need to cram in some two dozen songs even when they have no relevant connection to the events in Turner’s life.

A glossy production might have helped camouflage some of those faults but director Phyllida Lloyd seems to have lost the mojo that turned Abba’s Mamma Mia! into a 14-year sensation (click here to read more about her).

This time out, Lloyd's staging just lurches along from one beat to the next, all to the accompaniment of inappropriate rhymes and for no logical reason. There’s no fun or wit to tie it altogether.

And despite listing almost a full battalion of producers in the Playbill (including Turner and her second husband Erwin Bach) the show looks cheap, with lots of mylar streamers and moody video projections that look as though they had been put together late at night after a few too many energy drinks.

The show’s one saving grace—and it’s a big one—is Warren, who seems to have been hewn from the same tree of talent and vitality as the real Turner. I once saw Turner at a concert in Reno, where the audience was attentive and appreciative during most of the performance. Unsatisfied with that, Turner transfused the crowd with her own energy until it was almost ecstatic with joy.

Warren displays the same determination, lifting her show onto her tiny shoulders and infusing it with her own life force. She belts out Turner's vocally-challenging songs, she performs Turner's exuberant dances, she sympathetically cowers from the brutality of Turner's first husband Ike, she charmingly falls for Turner's second husband.

She almost never leaves the stage, even several of her numerous costume changes are performed right in front of the audience (click here to read more about her).

But it is during the encore, when wearing the shag wig, tight shiny dress and impossibly high heels that have become the now-80 year old Turner’s trademark, that Warren completely fuses with her muse, ending it in sheer transcendent triumph.

To paraphrase the lyrics to a later Turner song, “she’s simply the best, better than all the rest.”