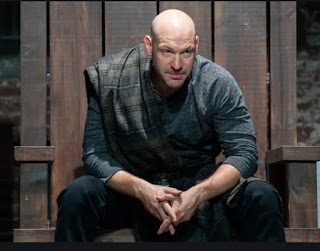 Macbeth is a great gateway drug for Shakespeare newbies. It’s got a straight-ahead plot, some of the Bard’s most memorable lines, plus witches. Us Shakespeare oldies like it too. It’s one of my favorites and despite the well-known superstition against saying its name in a theater (you’re supposed to say “The Scottish Play”) a lot of theater folks apparently also love it. Cause I’ve seen three variations in just the last six months.

First came Red Bull Theater’s production of Erica Schmidt’s Mac Beth, a reimagining of the play as a high-school revenge drama in which a band of contemporary girls meet after classes are over to rehearse the play and settle scores with one another in truly bloody fashion.

I found the show to be a bit histrionic (click here to read my full review) but earlier this week came word that, starting Jan. 6, it will get a seven-week encore run at the Frederick Loewe Theatre at Hunter College.

Last month the Roundabout Theatre Company opened Scotland, PA, a musical version of an indie film that sets the Bard’s tragedy in a small Pennsylvania town where stoners step in for the witches, the thane and his lady are recast as a meek fast-food restaurant worker and his more ambitious wife and the score is filled with composer Adam Gwon's ‘70s-style power ballads (click here for more about him).

That show, which is running at the Laura Pels Theatre thru Dec. 8, amused lots of the critics, including The New York Times’ Jesse Green who found it “quietly insightful, making piquant connections between Shakespeare’s drama of political power lust and the consumerist mania of our own fast-food culture.”

Maybe. But I found Scotland, PA to be just silly. Or perhaps not silly enough since the cast members, while talented and perfectly pleasant, lack the go-for-broke zaniness that you need to pull off a spoof like this.

The one exception is Jay Armstrong Johnson who brings a daffy charm to Banko, the lovable loser the show’s Mac eventually betrays. In the process, Johnson’s Banko also gives the show a heart it's otherwise missing.

The final entry in the Big Mac sweepstakes, at least for now, comes from Classic Stage Company. As usual, the company’s artistic director John Doyle applies his minimalist aesthetic to the production.

That means there is practically no set. The costumes are drab shades of black, brown and gray. And the entire cast consists of nine actors, including the two who play Macbeth and Lady Macbeth, which leads to all kinds of confusion about who is killing whom.

But the biggest crime is that Doyle doesn’t seem to have any reason for doing the play. The message of Mac Beth is that teenage girls can be as vicious as medieval warriors. Scotland, PA wants to show that even when the stakes are low, good people can turn into venal ones in pursuit of them.

Doyle’s take, however, isn’t sturdy enough to make the case for doing Shakespeare traditionally or offbeat enough to provide new insights into the play or telling parallels between its time and ours.

Instead, he does some gender-bending casting with Mary Beth Peil as King Duncan, although that’s less daring after the female Lears and Henry Vs we’ve recently seen.

He also attempts to go post-modern by changing the famous opening scene in which the witches ask “When shall we three meet again,”  so that the entire cast intones the lines. But of course that makes no sense at all: is everybody, including the Macbeths, supposed to be witches who are in on the evil game?

Perhaps Doyle did the play to showcase Corey Stoll, who, although still best known for his TV roles has been building up his Shakespeare street cred over the past few years in productions for Shakespeare in the Park.  And under surer direction, Stoll might have made a commanding Macbeth. But here, left directorially adrift, he flounders, resorting to shouting and arm flailing.

And it’s even more obvious that Nadia Bowers, Stoll’s real-life wife (click here to read more about the couple), could have used help in shaping her wan Lady Macbeth.

Still the play has fared worst (click here to read my review of the Lincoln Center debacle of a few years ago) and odds are that Macbeth will soon be given the chance to show its might in some other production soon.