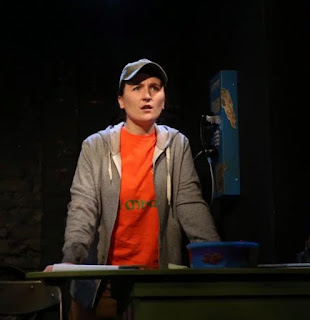 The monologue play is an odd hybrid. Unlike traditional monologues in which one actor talks directly to the audience, it usually features three or more performers. But unlike traditional plays, the actors in these shows seldom interact with one another even though the stories they’re telling overlap to form a single narrative.

These presentations can be big shows like The Lehman Trilogy, the three-and-a-half hour saga of the rise and fall of the Lehman Brothers investment firm that wowed London audiences last year, enjoyed a sold-out run at the Park Avenue Armory last spring and is scheduled to start a Broadway run in March.

But they’re more often intimate dramas that are relatively easy to produce, which may be why they’ve recently been sprouting up like kudzu. The Irish Repertory Theatre had a surprise success last summer with Elaine Murphy’s Little Gem and Keen Company’s also successful production of Brian Friel’s Molly Sweeney just closed a few weeks ago.

Now, the Irish Rep is doing Pumpgirl by the Irish playwright Abbie Spallen (the Irish seem to have a particular fondness for this genre) that is running in the Irish Rep’s underground studio space through Dec. 29.

Set in a contemporary Northern Irish border town, Pumpgirl tells the story of a guy named Hammy, who is married to a woman named Sinead and carrying on with the titular but otherwise unnamed young woman who works at the local gas station.

Each is frustrated by the limited opportunities that life is offering and aching for the thrill of a visceral connection. And all three will pay dearly for the latter.

Multiple soliloquies like these may be inexpensive to produce but they’re also tricky to stage. Should they be presented as naturalistic pieces, complete with scenery and exits and entrances by the characters  Or should they be treated more expressionistically on bare sets with the actors remaining onstage even while pretending to be unaware of one another?

Director Nicola Murphy tries to split the difference. She’s allowed set designer Yu-Hsuan Chen to create three separate playing spaces: the home where Sinead waits for Hammy, complete with a kitchen where she prepares evening tea for their two unseen kids and a bed where she spends sleepless nights; Hammy’s beloved car and the somewhat anachronistically old-fashioned gas station where Pumpgirl works.

It’s fun to see the bags of Taytos, the popular Irish snack food, displayed at the station but they look as though they’ve been there since the company started in 1958 and this is supposed to be the present.

But the greater problem is that the three sets are too much to crowd into a theater that holds about 60 people. Sinead’s bedclothes pool sloppily onto the floor, almost daring audience members not to trip on them on the way in and out of the theater.

Seating is general admission but the way things are setup require lot of neck craning no matter where you sit. My theatergoing buddy Bill and I got there early and chose what seemed to be a good spot but I still missed a lot of the action in Hammy’s car. And that’s not all I missed.

The actors stay onstage even when they’re not speaking. Lighting helps directs the focus but my eyes kept wandering to the silent figures sitting in the semi-darkness. And I have to confess my mind wandered occasionally too.

The actors—Hamish Allan-Headley as Hammy, Labhaoise Magee as Pumpgirl and especially the lively Clare O’Malley as Sinead —are all very good but Murphy has them speak with pronounced Irish accents that aren’t always easy to parse.

I lost whole paragraphs of dialog as I tried to decipher the words being said. Which is a shame because Spallen fills their speeches with wit, pathos, vivid images and sly pop cultural references (click here to read more about her).

Originally produced at the Edinburg Fringe Festival in 2006 (and later at Manhattan Theatre Club in 2007) Pumpgirl took on the devastating effects of toxic masculinity long before the phrase became fashionable.

So the play has a lot to say and Spallen not only knows how to say it but also how to build an almost Hitchcockian sense of suspense. I left the theater feeling that the play might have worked better as a short story—or in a less fussy and clearer-spoken production.