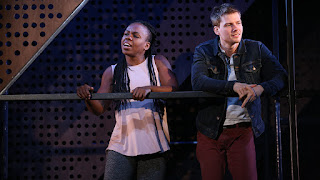 Something radical is happening on New York stages this season. It’s mainly taking place off-Broadway and it’s largely being driven by women of color who have written that most traditional of forms, a memory play about coming of age.

What’s radical about that, you ask?  Here’s what: these stories aren’t set in the inner city or some ethnic enclave and their primary focus isn’t on how badly white people have treated black, brown, yellow or red people. Instead, these are stories about middle-class kids growing up in the suburbs and struggling to figure out who they are, who they love and how to navigate the world. And the truly impressive thing is that they’re doing it without losing touch with their cultural roots, which only serves to enrich these plays all the more.

Two worthwhile examples of this phenomenon are Ngozi Anyanwu’s Good Grief, which ends its turn at the Vineyard Theatre this weekend and Ming Peiffer’s Usual Girls, which is playing in the Roundabout Theatre Company’s small black box theater at the Harold and Miriam Steinberg Center through Dec. 23. Both productions have flaws but each is daring us to look at the young women at the center of these stories in a different way than theater usually views young women who look like them.

The young woman at the center of Good Grief is Nkechi, a Nigerian-American teenager whom we first see in the ‘90s, growing up in affluent Bucks County, Pennsylvania, where the black population is tiny and she’s falling for her best friend MJ, a mixed-race kid whose good looks make him popular with all the girls and who is played here by the charismatic Bruno Mars-lookalike Ian Quinlan.

To Nkechi’s delight, MJ falls in love with her too and when, early in the 90-minute play, she loses him when he dies in a car crash, her grief is so overwhelming that she resists all the efforts to ease her pain offered by her physician parents, adoring older brother or JD, the white guy who has had a crush on her since grade school and who is played by TV hunk Hunter Parrish.

The playwright herself, a dark-skinned woman with long black braids and an athletic build, plays Nkechi and it took me a moment to realize how rare it was for someone who looks like her to be the main object of desire, as opposed to the thin, fair-skinned, whiter featured black women who usually get such roles onstage and onscreen regardless of whether the writers and directors are white or black.

So Anyanwu’s mere presence is a radical statement (click here to read an interview with the playwright) but also is the fact that her character’s parents are well-educated immigrants, who love their child and draw on both the traditions of their native homeland (which allows the production to include African dance and bits of magical realism) and the contemporary options of their adopted home country (which offers opportunities for the play’s humorous psychobabble exchanges) to comfort her. We don’t see people like them onstage often enough either. 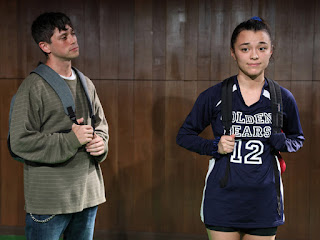 Nor do we see people like Kyeoung, the young Korean-American woman whose story Usual Girls follows over three decades, beginning on an elementary school playground in the ‘80s, where she is the only non-white kid in her suburban town. Some kids taunt Kyeoung because of the shape of her eyes but the real problem for her is that she’s an innately sensual girl in a world that privileges male sexuality.

Through the years, Kyeoung and her friends have experiences that encourage them to be sexual (grade school boys daring them to exchange a kiss; later older boys demanding blow jobs) and then punish them when they act on those feelings.

By the time Kyeoung’s in her teens, boys are taunting her with ignorantly racist remarks about Asian women having differently shaped vaginas. But all the girls are under relentless attack and in their confusion, they turn on one another or find ways to retreat by becoming less individualistic, identifying themselves through the men they hook up with or indulging in pathologies ranging from bulimia to drugs.

What keeps this play from being a downer is Peiffer’s sharp ear for dialog, much of it laugh-out-loud funny (click here to read a similarly entertaining interview with her) and the performances lead by Midori Francis’ fearless portrayal of Kyeoung, who may blame herself for bad dates that descend into date rape but finds the inner strength to resist being defined by those encounters.

The rest of the cast is terrific too. In fact the five actresses portraying revolving groups of Kyeoung’s friends were so good (particularly a standout Abby Corrigan as her quirky best friend Anna) that I was stunned when so relatively few people came out for the curtain call.

With the exception of the racist remarks, Kyeoung’s story could be that of any middle-class girl growing up in Middle America over the last few decades. And that’s the whole point. Korean-Americans, Nigerian-Americans, Muslim-Americans aren’t exotic or obsessed with being other; they’re just people and it’s gratifying to see them portrayed that way onstage.

It’s also gratifying that theaters are beginning to realize they should do that. Just this week, Chicago’s Steppenwolf Theatre Company announced that it had compiled a list of 208 plays that “feature a mix of diverse central characters who resist simple categorization and lead richly textured lives as they navigate a complex world.”
They’re calling their list “The Mix” and making it available to companies everywhere. Seeing all kinds of people of color onstage in all kinds of ways would cease to be radical, and maybe become normal, if a whole bunch of them got staged.