Remembering the Good and the Bad of the '60s with "Gloria: A Life" and "Days of Rage" 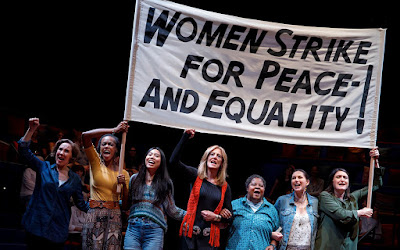 Love ‘em or hate ‘em, the 1960s continue to influence American discourse.  And those tumultuous times are front-and-center in two new recent plays: Gloria: A Life, a look at the career of the feminist leader Gloria Steinem that is playing at the Daryl Roth Theatre through Jan. 27; and Days of Rage, a dramedy about a group of Sixties radicals that is now scheduled to run at Second Stage Theater’s Tony Kiser space through Nov. 25.

Gloria was written by Emily Mann, the artistic director of New Jersey’s McCarter Theatre who is old enough to have experienced the ‘60s; and it’s directed by Diane Paulus, who came of age in its immediate wake. Both women clearly adore their subject and revere even more the kind of we’re-all-in-this-together activism that Steinem, now 84, has long championed.

Their show dances close to hagiography as it hopscotches through Steinem’s professional bio, touching on how she went undercover as a Playboy Bunny and wrote an expose about it; co-founded Ms. magazine; and clocked millions of miles and gave thousands of speeches to advance progressive causes ranging from pay equality to transgender rights.

Just small bits of personal information—how young Gloria cared for a mentally ill mother, how a fiercely independent Gloria married at 66 only to lose her husband to cancer three years later—are sprinkled across her well-known CV.

But while there are few personal revelations about Steinem in this show, you will learn about the debt she feels she owes to the women of color—Flo Kennedy, Wilma Mankiller among them—whom she proudly claims as mentors in the movement but whose roles have often been sidelined in the telling of its history.

Still, this is an ingratiating production. The amphitheater-like seating at the Roth provides an intimate space and the colorful pillows and cushions arrayed on its benches and rugs spread across the playing area make for a cozy and comfortable setting, as though it’s an extended family room.

Decked out in a shoulder-length blonde wig and Steinem’s trademark aviator glasses, the actress Christine Lahti, a personal friend of Steinem’s (click here to read about their relationship) works hard to turn the icon into a relatable gal.

Meanwhile, Paulus has assembled a determinedly multi-cultural ensemble of six actresses who, with the change of a top or headwear, effectively portray scores of people —male and female—who've passed through Steinem’s life.

A special shout-out has to go to Elaine J. McCarthy’s video projections, which include newsreels of the real Steinem and period photos that are bound to evoke memories for anyone who attended a consciousness raising group, participated in a sisterhood march or otherwise discovered the courage to speak up for herself back in the heyday of “women’s lib."

The show runs a little over an hour and a half and then Lahti invites the audience to spend another 20 minutes or so sharing their own experiences in the struggle for gender equality. The audience at the performance I attended was filled with the kind of smart, progressive-minded, middle-aged women who shop at Eileen Fisher (this is not a put down as anyone who has looked into my closet knows) and there was no shortage of volunteers.

There is a kind of preaching-to-the-choir quality about Gloria and what it calls its “talking circle” but, in these anxious times, sometimes the choir needs to sing—and to be listened to.

Days of Rage is somewhat ambivalent about what those lyrics should be. It’s written by Steven Levenson and directed by Trip Cullman, two white guys who weren’t even born in 1969, the year in which their play is set.

It centers around a commune of young white radicals, whose number has dwindled to three but who are still determined to participate in that fall’s anti-war demonstrations in Chicago that were organized by the Weather Underground faction of Students for a Democratic Society and that give the show its title. 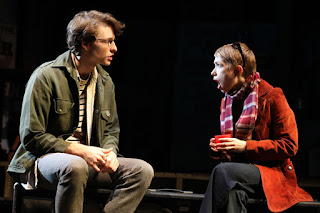 The trio—Spence, Jenny and Quinn—attempt to live by their interpretation of strict revolutionary doctrine, which means abiding by collective decisions, sharing everything and disdaining monogamy. Their efforts to recruit more people for the Chicago protest bring two more people into their orbit: Hal, a black guy who works at the local Sears and is attracted to Jenny; and Peggy, a white runaway who has $2,000 in her bag and a penchant for making mischief. Complications ensue.

It’s apparent that Levenson, whose previous work has shown him to be a thoughtful and gifted playwright, wants to look at the different kinds of people who were drawn to political activism in the Sixties. But he makes the ones here too one-dimensional.

Quinn (Odessa Young) is a working-class girl who wants to get back at the elites who have oppressed people like her; Spence (Mike Faist)  is an Ivy League college dropout attracted to intellectual arguments and Jenny (Lauren Patten) is looking for a way to atone for her upper-middle class privilege.

There are, however, some enjoyable moments in Days of Rage. Tavi Gevinson has great fun with Peggy’s madcap unpredictability, making her scenes the most entertaining of the evening. Meanwhile J. Alphonse Nicholson brings a sensitive wariness to Hal, a black man who knows he’s being valued more as a symbol than a person, making his scenes, particularly in the play’s latter half, among the most affecting.

The rest of the 90-minute play moves less convincingly back and forth between slapstick and melodrama as though Levenson can't make up his mind on what to think about the Sixties. But (and perhaps this is the baby boomer in me talking) maybe to fully get the Sixties, it helps to have lived through them.