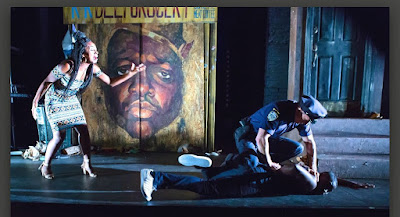 Ever since Aeschylus wrote the first Greek tragedies back in the fifth century B.C., playwrights have been creating works that wrestle with the pressing issues of their time. One of the most troubling issues of the last few years has been the murder of young black men by law enforcement officers. Those tragedies inspired the Black Lives Matter movement and now they've spawned a crop of audacious plays.

I saw two of them—Scraps and The Revolving Cycles Truly and Steadily Roll’d—earlier this month. Each has its faults and they won't appeal to all theatergoers but both knocked me out with their commitment to confronting the subject and their fearlessness in breaking established forms to do it.

Geraldine Inoa, the inaugural winner of a fellowship for “unsung voices” created by the TV writer and producer Shonda Rhimes, focuses on the aftermath of a police shooting in Scraps, which closes at The Flea Theater in TriBeCa tonight.

Scraps opens four months after Forest Winthrop, a college football player home during a school break, was shot to death by a cop while he was running to the store to buy diapers for his infant son. Traumatized by Forest’s death, his friends struggle to cope in various ways.

Aisha, the mother of his child, can barely suppress the rage she feels toward white people and even toward Forest, whom she had cautioned to be careful. Their neighbor Jean-Baptise seeks relief in smoking pot and composing rap lyrics about racial oppression. Forest’s best friend Calvin tries to deal with his grief by assimilating as much as he possibly can into the Ivy League world of Columbia University where he’s a scholarship student.

But most affected is Aisha’s sister Adriana, who has spiraled into a depression so severe that she’s given up going to her classes at NYU and barely washes or dresses in anything other than pajamas. The biggest fear they all share is that a wrong step by any of them could result in another premature death, a concern heightened when a menacing white cop appears on their block.

The second half of this 90-minute drama skips ahead a few years and becomes surrealistic as Inoa plunges into the nightmares of Forest’s now eight-year-old son who is trying to understand the cause of his father's death and who is terrified that the same thing will happen to him.

The boy is played by the adult actress Bryn Carter, who, under the finely-edged direction of The Flea’s artistic director Nigel Smith, gives a devastating performance as does the entire cast, all members of The Flea’s resident company The Bats (click here to read more about the making of the production).

I want to see all of them again and I plan on seeing the other two plays about race that The Flea is featuring in what it's calling its “Color Brave” season.

The Playwrights Realm, the company dedicated to supporting playwrights at the beginning of their careers, has opened its new season with Jonathan Payne’s The Revolving Cycles Truly and Steadily Roll’d, which is playing at The Duke on 42nd Street through Oct. 6. 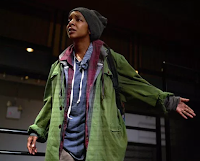 Payne’s story centers around the quest of a street kid named Karma to find her foster brother who has been missing for weeks. They've grown up in The Oblong, a poor and dangerous neighborhood whose most successful resident is the local undertaker because so many young people there die before their time.

Taking more than a few pages from Brecht's playbook, Payne names the mortician Profit and blames the Oblong's woes on the ruthlessness of capitalism. He also breaks the fourth wall with direct interactions with the audience. During one meta-moment an actor steps out of character to complain about what the playwright has him saying and doing.

The result is a play that's even messier and more in-your-face than Scraps. It isn't the kind of theater I usually like but I was fascinated by the passionate intensity with which Payne, who has a day job as a social worker, makes his case about the not-so benign neglect of these young people.

Under Awoye Timpo's energetic direction, the cast, most of them playing multiple roles, transforms his thesis into vivid life.  Kara Young is particularly effective as Karma, capturing the simultaneous toughness and vulnerability that put so many black youths at risk.

Eager to engage with their subject matter—and to force audiences to do so as well—both Scraps and Revolving Cycles undercut some of their power by trying to do too much. But this is the kind of misstep nearly all starting playwrights make and in these cases, the talent is sharp enough and the messages important enough for the errors to be forgiven.

Each show made some people in the audience around me visibly uncomfortable. But shaking people up is what they intend to do. I've tweeted and Facebooked about these shows but I wish I had written here about them sooner because, to paraphrase a wise man, attention to plays like these should be paid.