An "Uncle Vanya" That's Truly Stuck in a Rut 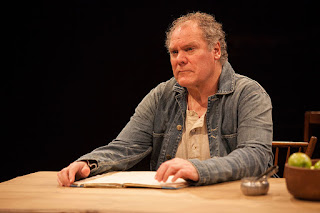 Just like the rest of us, theater makers can fall into ruts and end up doing the same thing over and over. That's what happened to John Doyle who repeated his conceit of having actors play their own instruments in the musicals he directed until the idea went from sublime (for some people, albeit never for me) to tiresome.

It's also happened to playwright Richard Nelson, whose go-to is putting a group of actors around a table where they eat some real food and whine about the unfairness of life. That's what Nelson, who likes to direct his own work, did with the cycle of Apple Family plays that ran at the Public Theater between 2010 and 2013 and The Gabriels trilogy, which played there in 2016. And now he's doing it with a new adaptation of Anton Chekhov's Uncle Vanya that opened this week at the Frederick Loewe Theater at Hunter College.

Some people loved the extreme naturalism of Nelson's family plays but I bailed on the Apples midway through their saga and passed entirely on the Gabriels. I can't say I'm all that happy with Nelson's treatment of Chekhov's clan either. Although I can see what probably drew him to them (click here to read about his adaptation process).

Like most of Chekhov's plays, Uncle Vanya is set on a country estate where a group of aristocrats, their relatives, retainers and other hangers-on sit around and bemoan their lives. In this case, the place is owned by Alexander Serebryakov, a retired art professor who has lived for years in the city but has returned to the rural estate he inherited from his long-deceased first wife with his much younger new wife Elena.

Managing the estate while the professor has been away have been Sonya, his grown daughter by his first marriage, and Vanya, his middle-aged former brother-in-law. Their most frequent guest has been Astrov, the perpetually disgruntled local doctor on whom Sonya has a not-so-secret crush.

Conflicts arise when both Astrov and Vanya fall for Elena and, separately, when Alexander decides to sell the estate so that he can afford to move back to the more exciting life of the city even though such a sale will upend the lives of Sonya and Vanya.

But, as with so much of Chekhov, the true drama occurs in the subtext, in the silences between the lines and on the faces of the actors playing the roles. And so the problems with this production began for me with the idea to stage the play in the round, which meant that I often couldn't see the expressions on the actors' faces because they were turned away from me even though I was sitting in good seats that had been reserved for critics.

It also doesn't help that Nelson has the actors speak without any attempt to project their voices. This, like the decision to outfit them in contemporary leisurewear, is in keeping with his low-key aesthetic but it struck me as a stage version of Mumblecore, those indie films that are so hell-bent on being natural that they often forget to be dramatic—or entertaining.

Jesse Pennington's apathetic spin on Astrov encapsulates that aesthetic but it was particularly off-putting to me because it conveyed little of the self-flagellating contempt with which the character views himself—and that makes him catnip to the women around him.

The one bright spot is Jay O. Sanders' sympathetic portrayal of Vanya. The burly actor was a mainstay of both the Apple and Gabriels plays and seems to have figured out how to be faithful to his director's understated approach without sacrificing the heightened emotion called for when Vanya realizes the futility of both the dreams he has nurtured and the sacrifices he's made.

This Vanya is the debut production of the Hunter Theater Project, a new initiative designed to make theater more accessible and affordable. By cutting some scenes and a couple of characters, Nelson and his co-translators have brought the play down to under two intermissionless hours. And tickets are just $37 for general admission and $15 for students.

Still if, by chance, you've never seen Uncle Vanya this isn't the one you should begin with. And you probably won't have to wait long before another production comes along because artistic directors can get in ruts too. This is the fourth major production of the play I've seen in just the past nine years.