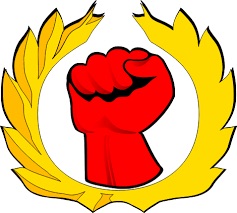 Maybe it's because I'm getting older but time seems to be passing more quickly than ever and the entire summer just flew by. One minute, I was watching my DVD version of 1776, which I try to do every Fourth of July, and now we're at Labor Day weekend. I usually observe the latter by using my blog post to celebrate some of the people who work hard to make the theater that folks like you and me love but I'm going to do something a little different this year. I want to salute the labor unions that represent the people who work in theater.

This isn't a good time for labor unions in general. Membership is down and just as the summer was starting, the Supreme Court ruled, 4-5, that government workers who choose not to join unions won't be required to pay fees that support collective bargaining efforts even though they benefit from those efforts. The decision doesn't have a direct effect on theater unions but it contributes to the overall belief that labor unions don't serve an important function. But they really do.

All the theater unions—the American Federation of Musicians, Local 802 (of which my husband K remains a proud member); the Association of Theatrical Press Agents and Managers, Local 18032; the Dramatists Guild, which represents playwrights; the International Alliance of Theatrical Stage Employees; the International Makeup Artists-Hair Stylists Union Local 798; the Society of Stage Directors and Choreographers; the Theatrical Protective Union Stage Hands, Local 1; the Theatrical Wardrobe Union, Local 764; and the Treasurers & Ticket Sellers Union, Local 751—make sure that their members work under safe conditions and for decent pay.

But I'm going to give an extra cheer to the Actors' Equity Association, which started in 1913 with 112 actors and now represents more than 50,000. Its creation was a game changer back at the turn of the last century, when actors were held in low esteem and treated worse. They often had to buy their own costumes and pay their own travel expenses. And even then, it wasn't unusual for some shady producers to run off and leave the actors stranded without pay at the end of a tour.

From 1913 to 1929, the union fought for the right to represent its members in contract negotiations with producers. During that time, some of the biggest names on the stage, like Tallulah Bankhead and the Barrymore siblings, leant their names to the cause, even joining  strikes and walking picket lines.

Once its authority was established, Equity took up other progressive causes, advocating against racial segregation as early as the 1940s, refusing to participate in the McCarthy blacklists of the '50s, lobbying for government support of the arts in the 1960s and responding to the AIDS crisis in the 1970s and right up to today with its Broadway Cares/Equity Fights AIDS fundraising campaigns. You can find out more about the organization's history in "Performance of the Century" by Robert Simonson (which you can find by clicking here).

Equity is currently lead by Kate Shindle, a former Miss America and the youngest president in the union's history. Under her leadership, the group has continued to champion the underdog. It's renamed the ceremony in which the chorus member with the most Broadway credits dons a robe on opening night and circles the stage for good luck. That garment is now known as the Legacy Robe instead of the Gypsy Robe, a term some found offensive. Equity is also lobbying for the Tonys to create an award for ensemble members in Broadway shows.

I support the robe decision, have some issues with the idea of an ensemble Tony but am grateful that Equity and all the Broadway unions are standing up for their members and for the belief that it takes a village to make a show.