"The Violin" Plays an Old-Fashioned Tune 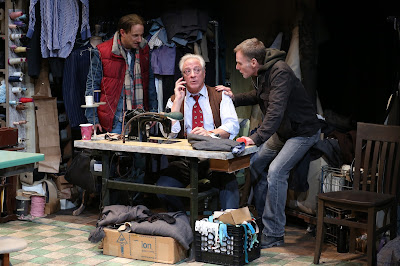 The instrument that gives The Violin its title is what the film director Alfred Hitchcock used to call a MacGuffin, a plot device to provide some momentum for what in this play, which opened at the 59E59 Theaters this week, is really a character study of three lost souls.

They are Bobby, a twentysomething petty crook; Terry, his slow-witted younger brother and Giovanni, a middle-aged tailor who has been a surrogate father to the brothers since their parents were killed by local mobsters when they were still boys and their Lower East Side neighborhood had yet to gentrify.

As the play opens, Terry has just quit his job as a cab driver and brought home a violin case someone left in the backseat. Inside they find an 18th century Stradivarius which Bobby believes can be ransomed for a six-figure fee from its owner.

Gio, as the brothers call the tailor, initially wants nothing to do with the extortion scheme but is gradually seduced into it. I hope it's no spoiler to say that their plan goes awry.

But even the conspiracy is another MacGuffin. For what really interests playwright Dan McCormick are the ways in which we define family and the obligations we owe—and should be able to demand from—those we love.

These are familiar themes and there's a thrown-back quality to director Joseph Discher's production too. In dress, mannerisms and dems-and-dese speech, all three men would be right at home in an Elia Kazan-era melodrama. Even Gio's antiquated tailor shop looks as though it's been left over from the Eisenhower Administration.

And the dramaturgy—dependent on anguished soliloquies about unrequited dreams and not-so-surprising revelations about the past—is a little timeworn too.

But despite all this, my husband K and I had a good time. And that's largely due to the committed performances from Peter Bradbury, Kevin Isola and most especially Robert LuPone, the co-artistic director of MCC Theatre who hasn't been onstage since 2001 (click here to read an interview with him) but seems happy to be back.They all chomp a bit on the scenery but it's fun to watch them do it.