Experience has taught me that I'm a terrible prognosticator. So many of the shows I get all worked up about at the beginning of a theater season end up disappointing me. And then shows that I'm kind of ho-hum about when I first hear or read about them turn out to be some of my all-time faves. Yet, I can't resist looking ahead and thinking about what's to come this fall. And this year, the thing that pleases me the most (and that will continue to do so regardless of what I eventually think about the shows) is the presence of female directors at the helm of some of the most anticipated productions of this fall season: 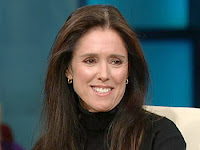 M. Butterfly directed by JULIE TAYMOR. Playwright David Henry Hwang explored cultural and gender stereotypes in this mash-up of Puccini's "Madama Butterfly" and the real-life story of a French diplomat who fell for a Chinese opera star who seduced him into betraying his country before he discovered that his lover was actually a man masquerading as a woman. The original 1988 production won both a Pulitzer Prize and a Best Play Tony and ran for over two years. Now Taymor, herself a Tony winner for The Lion King, now in its 20th year, is directing M. Butterfly's first Broadway revival. That's exciting enough but the production will also mark Taymor's first return to Broadway since she was infamously fired from Spider-Man: Turn Off the Dark. M. Butterfly's themes seem more up Taymor's alley and like most avid theatergoers, I'm eager to see how she will use the music, dance, puppets and Asian theater techniques she loves to make it her own. The play, which will star Clive Owen and Jin Ha as the mismatched lovers, is scheduled to open at the Cort Theatre Oct. 26.

The Parisian Woman directed by PAM MACKINNON. Set in contemporary Washington, this new comedy of manners centers around a woman who tries to get her lover to help her husband get a high-level position in the government. Beau Willimon, the creator of the Netflix series "House of Cards," specializes in political satire and he based his play on the similarly-named 19th century political drama by the French playwright Henry François Becque. MacKinnon, who won a Tony for directing the 2013 revival of Who's Afraid of Virginia Woolf?, knows how to wrangle strong female characters and the strong actors who play them. This time out she'll be working with Uma Thurman, who has played lots of tough women in movies but will be making her Broadway debut. The supporting cast includes Blair Brown, Phillipa Soo and Josh Lucas. The show is set to make its world premiere at the Hudson Theatre on Nov. 30.

SpongeBob SquarePants directed by TINA LANDAU. I've got to be honest and say that I have my doubts about this one but the word-of-mouth has been surprisingly good for this musical version of the animated TV show about the titular sea creature and his oddball friends who live in an underwater town called Bikini Bottom. The musical also features an oddball score of original songs by a boatload of major contemporary songwriters including Susan Bareilles, John Legend, Cyndi Lauper, Lady Antebellum and David Bowie. Just the fact that they all wanted to be involved in this project makes me want to see it. But the show's ultimate success will rest on the shoulders of Landau, who is not only directing SpongeBob but conceived the musical and has nurtured what's being touted as a paean to tolerance and acceptance of others through a tryout in Chicago last year and soon onto the stage at the legendary Palace Theatre, where the good-natured parazoan and his pals are scheduled to open on Dec. 4

Time and the Conways directed by REBECCA TAICHMAN. Fresh off her Tony win for the luminous Indecent, which marked her Broadway debut, Taichman is now leading a revival of J. B. Priestley's 1937 drama about the changing fortunes of an upper-class British family. The play is part family saga, part allegory about Britain between the World Wars and a meditation on the metaphysics of time. The versatile Taichman directed a well-received production of the play at the Old Globe in San Diego last year. In this Roundabout Theatre production, the family matriarch will be played by Elizabeth McGovern, returning to the Broadway stage for the first time in 25 years but already conditioned for the part by her turn as the mistress of the house for six seasons on "Downton Abbey." McGovern, along with a nine-member supporting cast that includes the always-watchable Gabriel Ebert and Stephen Boyer, will open The Conways at the American Airlines Theatre on  Oct. 10.