"Pipeline" is Unsure of Where It Wants to Go 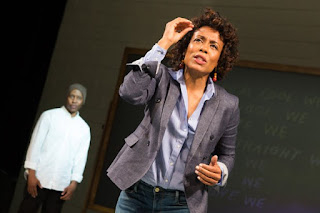 Dominique Morisseau's reputation as both a lyrical and thoughtful playwright has been growing for a few years now. Detroit '67, the first in a three-play cycle she wrote about her hometown, won the Edward M. Kennedy Prize for Drama in 2014. And the third, Skeleton Crew, created such a sensation when it played at Atlantic Theater Company in January 2016, that it was brought back for an additional run six months later, which is when I saw it and loved it so much that it made my list of last year's Top 10 shows.

But this is shaping up to be Morisseau's true breakthrough season. Signature Theater has named her one of its resident playwrights and will present her play Paradise Blue next spring. And last week, Lincoln Center Theater opened her Pipeline at its Mitzi E. Newhouse Theater. I'm happy to see such a gifted writer getting such mainstream exposure, but I also wish Pipeline had shown her work off to greater effect.

The play is a rumination on what it means to raise a black son when even the slightest wrong decision could result in his being killed by police or sent away to prison. Nya, the mom in Morisseau's drama, is a public school teacher who has tried to safeguard her own son Omari by sending him to a prestigious prep school. But as the play opens, she gets the news that he's about to be expelled—and possibly worse—for assaulting one of his teachers.

Did Omari snap because, as he claims, he was baited by the teacher? Or is he acting out because his parents are divorcing and he feels neglected by his dad, an affluent exec whose chief contact with the teen has been through the checks he sends each month?  Or is he simply a victim of the conventional image of black boys described in the 1960 Gwendolyn Brooks poem "We Real Cool," which is dramatically rendered in the play? (Click here to read the poem).

Morisseau attempts to answer these questions and some others as well but she bites off more than she can comfortably chew in 90 minutes. She also overwrites some of the arias she's created for Nya, Omari, his girlfriend Jasmine and even for Laurie, a white colleague of Nya's in a public high school where even teachers run the risk of becoming victims of violence.

But the main fault in this production is less with the text than with the direction. Morisseau's work cries out for the kind of vibrant naturalism that Ruben Santiago-Hudson gave Skeleton Crew. But Pipeline has been staged by Lileana Blain-Cruz who tends to favor a more stripped down expressionism.

Here, she and set designer Matt Saunders have created a big white wall that could be found at either institutional end of the school-to-prison pipeline from which the play takes its title but, under Yi Zhao's intentionally harsh lighting, it dwarfs the stage.

Similarly the intense video projections by Hannah Wasileski double down so hard on images of the volatile atmosphere in public high schools that they took me out of the play.

Directors of new plays also have a responsibility to help the playwright weed out their play's undergrowth but Pipeline is seriously under-pruned. And the casting is also a bit off.

The always-dynamic Karen Pittman is strong and sympathetic as Nya, who is overwhelmed by her efforts to protect her son. But although Namir Smallwood gives an equally committed performance as Omari, the actor is in his mid-30s and I just didn't buy him as a high-school aged teen.

Heather Velazquez and Tasha Lawrence provide high energy (and some humor) as Jasmine and Laurie but their performances have been amped up so high that they verge on caricature. Meanwhile, the issues their characters represent (the challenges of being a minority kid at a predominantly white school; the demands of being a caring teacher at an understaffed inner-city school) detract from Pipeline's main plot. These subjects deserve their own plays.

But those lapses are somewhat emblematic of this play. Despite a literal list of recommendations that one character reads at the end, it was never clear to me what Morisseau wants to say about the way society is treating young black men, other than that it should do a better job.

I thought we already know that but lots of reviews suggest that the play is providing a wake-up service (click here to read some of the praise) and it's hard to argue with that so I'll just end here.