"Napoli, Brooklyn" is All Over the Map 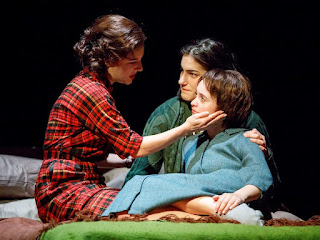 The woman sitting next to me at the Roundabout Company's Laura Pels Theatre was the perfect audience for Napoli, Brooklyn, the new family drama that opened there this week. She guffawed at its one-liners. She wiped away tears when members of the play's midcentury Italian-American family failed to connect with one another. And she sat up in her chair, shaped her hands into a megaphone and bellowed "Bravo" as the actors walked out for the curtain call. I think the only thing that disappointed her about the show was my response to it, which was far more tepid than hers.

Napoli, Brooklyn centers on the Muscolino family, which includes Luda and Nic, immigrants who still lapse into Italian when they're excited or otherwise emotional, and their three American-born daughters who all live together in a cramped apartment in Park Slope, long before it got gentrified.

Luda, played with commanding presence by Alyssa Bresnahan, attends daily mass, conducts chiding conversations with God and cooks endless dishes of pasta. Her husband Nic is prone to violent outbursts. And the family is so strapped for cash that the three girls, the youngest of them 16, have to share a bed. When the play opens, however, the middle daughter Vita has been exiled to a convent following a disastrous altercation with Nic.

That would seem to be enough for playwright Meghan Kennedy to work with. But Kennedy heaps on a whole bunch of other stuff: the Irish butcher carries a torch for Luda; the youngest daughter Cesca is a lesbian who is scheming to run away with the girl she loves; older sister Tina strikes up a friendship with a black co-worker and a tragedy, based on a real-life event, shakes the entire neighborhood.

It's too much. And I didn't believe any of it, except for that real-life event, which director Gordon Edelstein stages to impressive effect at the end of the first act.

I get that Kennedy, who says the play was inspired by her mother's life, is trying to look at the myriad ways in which the lives of women, particularly working-class women, were circumscribed in 1960, the year in which the play takes place. But her determination to touch on every obstacle they might have faced leaves her little room to dig deep into any of them.

What's left are stereotypes and platitudes. Like so many young playwrights Kennedy tries to cover up the patchy parts of her play with a couple of explain-it-all speeches at the end. For me, it was too little and too late.

And yet, as my seat mate demonstrated, there's clearly an audience for this play. During intermission, I overheard people reminiscing about the historical event and comparing the characters, particularly Luda, to women in their own families. Maybe it helps to be Italian.