Yours Unfaithfully Takes On Marital Fidelity 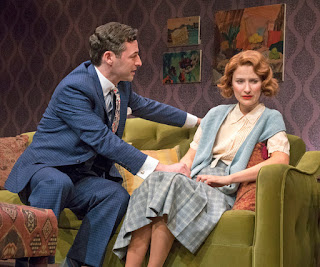 A card-carrying member of the Bright Young Things, the bohemian artists and aristocrats who flouted conventional norms in England during the 1920s, the actor and playwright Miles Malleson had an open marriage. He saw other women and his wife carried on a years-long love affair with the philosopher Bertrand Russell.

They all continued to socialize amicably even after the Mallesons divorced but in 1933, he wrote Yours Unfaithfully, a play that wrestles with the idea of that kind of marriage. Unable to get pass the censors of that day, it was never produced. Until now. The Mint Theater Company, known for showcasing neglected works, staged the world premiere last week at the Beckett Theater on Theatre Row, where it will run through Feb. 18.

Everyone loves the Mint for its theatrical resurrections but I've found that there's often a sameness about its shows. The scripts, by definition, tend to be old-fashioned and the productions lean toward the staid and somewhat reverent. But Yours Unfaithfully is surprisingly contemporary for a play written more than 80 years ago, and this production is totally engaging.

As my friend Phil said when he emailed me after we saw the show, "I don't know which time in history would best suit it but it seems like Yours Unfaithfully could've been a small hit."

Unlike Noel Coward, who turned similar scenarios into frothy comedies such as Design for Living and Private Lives, Malleson, having lived through the experience as a married man, takes the idea of polyamory more seriously and hones in on the emotional fallout it can create. You can feel him struggling to figure out if people really can share one another in this way.

His drama starts off like the traditional drawing-room play, with a small dinner party hosted by a writer named Stephen Meredith and his wife Anne, who runs a progressive school. Their guests are Diana, a recent widow; and Alan, a psychiatrist who serves as a confidante to both the husband and wife.

Stephen has been suffering a case of writers block and Anne, after eight years of marriage, a bout of boredom. In a moment of inspiration, Anne decides that they might reignite both sparks if Stephen and Diana have an affair and she not-so-subtly encourages them to do so.

Almost everything goes according to plan. Stephen and Diana hook up. He starts writing again. And the Merediths reconfirm their love for one another. But when Stephen and Diana plan to take off on a holiday together, Anne discovers that she's jealous.

The realization distresses her because she truly wants Stephen to enjoy the happiness the affair is bringing him, because he was accepting when she had an earlier fling but, most important of all, because the jealousy violates the sense she has of the kind of woman she wants to be.

Anne's attempt to tame that jealousy puts a different strain on the marriage that director Jonathan Bank underscores with a series of beautifully orchestrated silent scenes that speak just as loudly as Malleson's well-crafted dialog.

It's all executed by an excellent cast. Max von Essen, fresh from his run as the conflicted French aristocrat in An American in Paris, confidently assumes a British accent and the demeanor of a passionate man used to getting his own way.

The willowy Elisabeth Gray, who grew up in the South but trained in England, captures both the casual hauteur of a freethinking patrician like Anne and the genuine pain that commitment to such freedom can cause.

Not everything works. We're told that the Merediths have young children but they're never seen or even taken into account as the couple works through their complicated relationship. Meanwhile, Alan's wife is mentioned several times but never appears, not even at the dinner party.

Also, there's far too much talk about cricket, a sport beloved by Stephen and his father, a parson who is the stand-in for traditional morality. I suppose there's a metaphor somewhere in there but knowing nothing about cricket, it escaped me.

Finally, theatergoers who like tidy endings may balk at Malleson's ambiguous one. But those of a more open-minded disposition will find it gives them a lot to think about.