Taking Time Out For (Bad) News 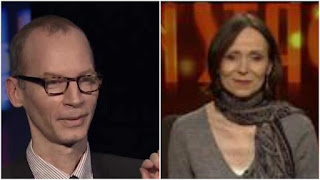 News for us theater junkies usually means a new show or a major cast replacement but this still-new year has brought some events that will shake up the way that those of obsessed with theater interact with what is going on in the theater world.  So I'm taking some time out from the usual reviews to try to figure out what's going on.

Three weeks ago, "On Stage," the cable news show that covers theater here in New York, disrupted (to use the word of the moment) its format, including ousting its longtime host and producer Donna Karger, who has been with the show since it debuted in 1998. Then this week, came word that the New York Times theater critic Charles Isherwood has left the paper after serving as its No. 2 critic for 12 years.

Both developments have left me in a kind of mourning state. Which really surprises me because I wasn't a big fan of either Karger or Isherwood. But the holes they've left worry me.

Karger always seemed a nice woman but she was stiff on camera and seldom strayed from a few set phrases that she repeated each episode. She was a terrible interviewer too, reading overly-long questions from index cards that she nervously shuffled and barely listening to her guests' answers before barreling on with the next query.

But, as my husband K observes, Karger put the spotlight on the shows and the people who made them instead of on herself.  The same can't be said for her successor Frank DiLella, who has been playing the Eve Harrington to Karger's Margot Channing for over a decade now.

DiLella started off as an occasional contributor and then worked his way up to a show regular who often sat in for Karger when she was on vacation. He was good-looking (resembling a young Jerry Mitchell) and hard-working (he not only covered every major opening but made reporting trips to London and other theater centers, reportedly on his own dime or his rich dad's).

An unabashed fanboy, he also clearly loved the segments in which he dressed up and joined actors for a performance. It was sometimes silly but it provided a cute alternative to the interviews and reviews that made up the rest of the show. But last month, Karger disappeared with no explanation, DiLella took over and the show is now nothing but silliness.

Over the past three weeks, DiLella, the show's chief critic Roma Torre and a couple of contributors have hopped around to different Broadway hangouts such as Chez Josephine and  54 Below and pretended to run into the guests lined up for the show. Torre's reviews have been shortened and corny stunts like gossip from a shadowy masked figure (maybe DiLella himself?) have been added.

Lost in all the hoopla is any true sense of what recent and upcoming shows are about or what their creators and stars have to say about them. I wouldn't mind so much if "On Stage" weren't one of the only sources of theater news on TV.

It's as though a nourishing, if predictable, meal has been replaced with a big bowl of Marshmallow Fluff.  I really do hope the network execs are reading the chat room comments about the changes cause they're even more harsh than I've been.

And now onto the news about Isherwood. His taste (he chastised his fellow critics, the public and the Tony nominating committee for not liking Will Eno's abstruse play The Realistic Jones three years ago) and mine (I couldn't wait to get out of the theater after seeing that Eno play) seldom aligned but I appreciated Isherwood's intelligence and I hate to see anyone lose their job.

What really worried me, though, is that his departure has come in the midst of changes in cultural coverage at the Times and the threat that the paper's commitment to theater might lessen.

We now have lots of online sites and blogs like this one that focus on theater but average theatergoers, those who see four or so shows a year, still depend on the Times. Which means that all of us who love theater do as well.

So I'm going to end this post on a positive note: the paper says it has already begun to advertise for a critic to replace Isherwood. And I don't know about you but I'm going to take what comfort I can from that.