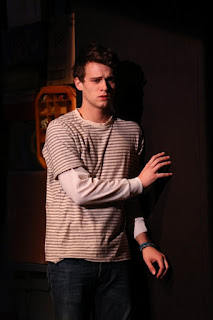 Stephen Sondheim will turn 87 next month but he's working on a new musical tentatively called Buñuel that is scheduled to have a full workshop production at the Public Theater later this spring. Meanwhile John Kander will hit 90 on March 18 but he too has written a new musical called Kid Victory that opened at the Vineyard Theatre this week.

Kid Victory is the onscreen handle of a teen boy named Luke who lives with his middle-American and very devout parents but spends most of his time playing an online video game and exchanging emails with another gamester who convinces Luke to meet up with him. The play opens with Luke chained to a wall in a basement.

As my theatergoing buddy Bill observed over a post-show dinner at the nearby Pete's Tavern, Kid Victory is part of a wave of harrowing stories about kids who have been abducted including the CBS series "Stranger Things," the Oscar-nominated movie "Room" and the National Book Award finalist "A Little Life."

This musical version, co-written with Kander's new partner Greg Pierce (click here to read about their collaboration), seems to be an original story and its narrative attempts to offer some surprises. But it isn't clear why the collaborators have decided to tell this tale or what they want it to say.

Religion seems to play a role but it's never developed. Luke's confusion about his sexuality is suggested but left unexplored.

The music is similarly ambiguous, failing to settle on a sound that captures the emotional experience of this show. Instead, it kind of hopscotches around, occasionally evoking tunes that Kander and his former partner, the late great Fred Ebb, wrote for such shows as Cabaret, Chicago and Kiss of the Spiderwoman.

Some of the new melodies are lovely and there are even a couple of Kander's trademark vamps. And Pierce's lyrics are fine, some of them quite clever. But none of it really commands the ear or lingers there.

Liesl Tommy's direction doesn't help. The sequence of events is muddy as the time jumps non-chronologically to before, after and during Luke's captivity. Supporting cast members play multiple roles and confusingly serve as backup singers (and jarringly a tap-dancing chorus) without apparent reasons for them being in those particular scenes.

Still, the acting is strong and it's particularly nice to see such stage vets as Karen Ziemba and Jeffry Denman (nicely creepy as the boy's captor) get a chance to shine once again. Meanwhile, Dee Roscioli charms the audience as the town eccentric who provides an emotional refuge for Luke and a second story line that the show probably doesn't need.

And Brandon Flynn, a 23 year-old actor who recently graduated from the Mason Gross School of the Arts at Rutgers University and lists his day job as a bartender in his credits, rises to the occasion as Luke, appropriately moody and conflicted when the boy is returned to his family and tries to settle back in.

I can't say anything about Flynn's singing voice because Luke is given no songs, which I guess is supposed to underscore the character's feelings of alienation but left Bill and me wishing that he'd had his "Being Alive" moment.

Kander was seated at the end of our row during the preview performance Bill and I saw and later we spotted him and Pierce at a table at Pete's. There were reports that the show was being worked on right up until the opening. And he and Pierce may continue to tinker, although the word is out that they've already begun working on a new show.