Why "Finian"s Rainbow" Doesn't Glow for Me 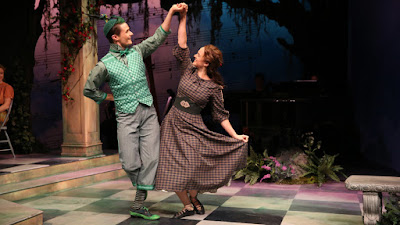 Melissa Errico visited the cable news show "On Stage" this past weekend to talk about her latest show, the Irish Repertory Theatre's revival of Finian's Rainbow, which has been extended through Jan. 29. Depending greatly on who's asking the questions, "On Stage" interviews can be a trial.

But Errico handled hers like the pro she is and was charming, funny and such a terrific advocate for her show that it made me want to see it. Until I remembered that I already had seen it and had been only so-so impressed by it.

Although I have to confess that, once again, I seem to be playing the Scrooge role because judging by the grades on Show-Score, the site that aggregates reviews, most of the critics were quite taken by this musical fable about an Irish man who steals a magical pot of gold from a leprechaun and flees to the fictional American state of Missitucky, where he and his daughter Sharon encounter singing and dancing sharecroppers, a labor organizer with a mute sister and a bunch of crooked politicians, including a racist senator who is eventually transformed into a black man.

Finian, which will celebrate its 70th anniversary next month, was considered an innovative and even daring show when it opened in 1947. It brazenly took on the issue of bigotry by satirizing the white supremacist senator Theodore G. Bilbo and was the first show on Broadway to feature an integrated ensemble of black and white singers and dancers.

The score, with music by Burton Lane and lyrics by Yip Harburg, features such still-beloved  songs as "How Are Things in Glocca Morra?" "Look to the Rainbow" and "Old Devil Moon" and is considered by connoisseurs to be one of Broadway's best.

In his opening night review, New York Times critic Brooks Atkinson declared that the show put "the American musical stage several steps forward for the imagination with which it is written and for the stunning virtuosity of the performance." And as I said, lots of critics love this current production too (click here to read some of their raves).

But there's a hokiness about Finian's Rainbow that has never sat right with me (click here to read my review of the 2009 Broadway revival with Kate Baldwin, Cheyenne Jackson and Jim Norton) and in many ways, the Irish Rep's stripped down version (the 1947 original boasted a cast of 56 and even the 2009 revival had 30, while this one makes do with 13) struck me as little more diverting than an average high school production.

The Rep's revival, adapted and directed by its artistic director Charlotte Moore, has condensed the plot, making the story even more difficult to follow than it originally was. And the production is so bare-bones that costume designer David Toser simply put a scarf on Errico's head to indicate a major costume change.

The entire cast works hard but while they all have great voices, they're a mixed bag when it comes to acting. Ryan Silverman, who usually plays the role of the labor organizer Woody, was out the night my sister and I saw the show and so we gave some leeway to his understudy Matt Gibson.

But we didn't have to make any excuses for Errico, who first played the part of Sharon in another Irish Rep production 12 years ago. She looks great and has a glorious voice that is just right for the show's sweet melodies and it was lovely to hear it in an intimate space with no amplification. Still at 46, Errico really is too old to play the role of a winsome ingénue (click here to read her views about that).

The best thing about the show is the newcomer Mark Evans, who is making his New York debut in the role of the leprechaun Og. Evans puts such a delightfully novel spin on the character that he comes across like the wunderkind in the high school show whom everyone expects to move on to better things. And I'm betting that he'll do exactly that.