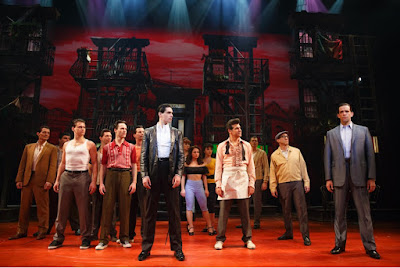 Some shows just aren't made for critics, theater snobs and other members of the theatergoing aristocracy who are always on the prowl for something cutting edge. A Bronx Tale, which opened at the Longacre Theatre last week, is one of those shows. It's a well-crafted traditional musical with an easy-listening score, peppy dance numbers, entertaining performances and an accessible plot with a comfortable can-we-all-get-along message.

Yet the show isn't getting much respect. And the nods it is getting kind of damn it with faint praise. The New York Times' Charles Isherwood, one of the more welcoming of the major critics, opened his review by likening it to "plain old pasta with red sauce."

On the other hand, the show is getting lots of audience love. It's been playing to 90% capacity since previews began a month ago, with its average ticket price hovering around $100.

The aristocrats sniff that the people coming out to see A Bronx Tale are the bridge-and-tunnel crowd that made Jersey Boys, which is scheduled to play its final performance on Jan. 15, a 12-year hit. Or they blame the tourist ticket buyers who might have seen the 1993 movie, which was directed by and starred Robert De Niro. But you can also count me, a native New Yorker, among the show's fans. A Bronx Tale isn't the most innovative show I've ever seen but it offers a good time.

Its story about a kid growing up during the '50s and '60s in an Italian neighborhood in the Bronx, where his loyalties are torn between his father, a bus driver; and Sonny, the local mob boss, is familiar because this is a tale that's been told several times.

Chazz Palminteri, who wrote the book for the show, began performing a semi-autobiographical version as a one-man show in Los Angeles in the late '80s, brought that to off-Broadway in 1989, played the role of Sonny in the film four years later and then did another solo version on Broadway in 2007 and took it out on a national tour (click here to read the complete history).

The new musical version hits every plot point, including the kid's teen romance with a black girl, which carries echoes of West Side Story. Everything else is in place too. the show's score by Alan Menken evokes the doo-wop of the 1950s and the R&B of the early '60s. Glenn Slater's lyrics aren't as clever as they're pretending to be but they get the job done. And Sergio Trujillo's dances make all the right moves (click here to read an interview with him).

The directing duties have been split between the very different sensibilities of De Niro and stage vet Jerry Zaks but the double-teaming has somehow worked and they've managed to land everyone in their 30-member cast on the same page.

The sweet-faced Bobby Conte Thornton (click here for a Q&A with him) is enormously appealing as the conflicted protagonist, whose given name is, like Palminteri's, Calogero but who goes by the nickname C. And Ariana DeBose sings the hell out of the songs she's been given as C's love interest Jane.

But there's no doubt that the show's MVP is Nick Cordero who plays the charismatic mobster Sonny. Cordero won a Tony nomination for playing a similar role in Bullets Over Broadway and the finely honed swagger he displays here makes it easy to understand why C is so enthralled by him.

The show attempts to offer some substance and complexity by having C's good-guy dad oppose his interracial relationship with Jane, while Sonny, a certified bad guy who kills a man before the opening number is finished, supports it.  But Isherwood is basically right. A Bronx Tale is comfort food. And that may be why I liked it.

Those with more refined palates might argue that such a show, no matter how competently done, is taking up space that could go to a work that advances the art form.  But what if you're not in the mood for the umami of a form-advancing show but just want a well made one?  Cause, to be honest, given the past few weeks, comfort is just what I've been hungry for.