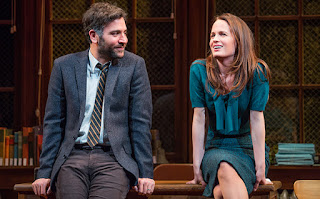 Earlier this year, the playwright Richard Greenberg released a collection of odd little pieces that weren't entirely fiction but not quite memoir either. Instead they unspool like the unanchored ramblings of the guy everyone tries to avoid at the office holiday party. And, alas, The Babylon Line, the new Greenberg play running at Lincoln Center Theater's Mitzi E. Newhouse through Jan. 22, comes off pretty much the same way.

It's framed as the memory of a now-elderly man named Aaron Port who looks back at a time in the late '60s when, needing money, he took the eponymous train line from Manhattan to Long Island to teach a writing class for an adult education program in the Ur-suburb of Levittown.

His students are a group of bored housewives and a couple of emotionally damaged men, most of whom wanted to take some other course but settled for this one when they couldn't get their first choice. But among them is the neighborhood oddball Joan Dellamond, who enthralls the married Aaron with her natural writing talent and earthy sexiness.

It's a promising enough premise, and it seems ideal for Greenberg who has chronicled midcentury middle-class angst in such plays as The American Plan and The Assembled Parties. But the playwright seems flummoxed by what to do with the Babylon plot once he's set it up.

Instead of dramatizing the story, he lets Aaron narrate its developments in direct address to the audience. Then, the actors, under Terry Kinney's flat direction, perform short scenes that illustrate some of the revelations, read excerpts from their writing assignments and deliver a few decent jokes.

The cast, particularly the supporting players who include such heavyweights as Frank Wood, Randy Graff and Julie Halston, is first-rate. But the characters they're given to play are just thin stereotypes: the angry war vet, the bossy Jewish matron and her ditzy and mousy sidekicks.

The relationship between Aaron and Joan is pretty flat too, although it's hard to fault Josh Radnor and Elizabeth Reaser who do the best with what little they've been given.

The pieces Aaron's students write get better as the course—and the show, which runs 2 hours and 20 minutes—progresses but there's still more telling than showing. And ultimately the individual stories, like the play they're in, go nowhere.