"School for Scandal" Is a Master Class in Wit 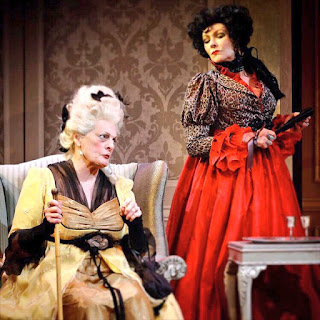 It's a shame that the Red Bull Theater's production of The School for Scandal is closing May 8, after barely a two-week run because this is one of the most delightful shows I've seen this season.

Of course, Richard Brinsley Sheridan's comedy of manners has been a crowd-pleaser since it debuted at London's Drury Lane Theatre in 1777. But I, somehow, had never seen it until now. That may be because I was expecting something fusty. Instead, I found this satirical look at the vanities of the British upper class to be as fresh and witty as a YouTube-worthy sketch from "Saturday Night Live."

The jam-packed plot tracks the feuds, romances and schemes among a group of frenemies with deliciously metaphorical names like Sneerwell and Backbite. It opens at the home of said Lady Sneerwell, a catty aristocrat who has her eye on the handsome but profligate Charles Surface.

She and her bosom buddy Mrs. Candour spend most of their time trading—and sometimes making up—gossip about the people they know (they're the school of the title) while being entirely oblivious to their own shortcomings.

Then there's Sir Peter Teazle, who has served as guardian to Charles and his not-as-goodie-two-shoes-as-he-pretends-to-be elder brother Joseph. Charles is in love with Teazle's ward Maria and Joseph is engaged in a flirtation with the much younger wife Sir Peter has recently married.

Both siblings are hoping to inherit money from their wealthy Uncle Oliver, who has secretly returned from years abroad in the Near East to determine which is more deserving of his fortune. And they're all attended by assorted servants and hangers-on, including a poet named Backbite and a journalist named Snake.

This kind of farcical comedy can easily go awry. If the actors strain too hard for laughs the comic soufflé will fall; if they aren't deft enough with the humor the soufflé won't rise in the first place. But director Marc Vietor keeps the balance just right with a sure-handedness that belies the fact that this is his directorial debut.

I've read that Vietor helped things along by trimming some of the political allusions that would have stung in Sheridan's day but have little meaning for modern audiences. He's also toned down some (although not all) of the casual racism of the time so that a moneylender originally named Moses is here called Midas.

But Vietor's smartest move was in the casting of his production. The actors he's assembled are all-around superb, from those in the flashiest roles to those in the tiniest bit parts.

Leading the merriment are Frances Barber, a mainstay of the London stage; and Dana Ivey, a treasure of the American (click here to read aninterview with her). They set a high standard as respectively Lady Sneerwell and Mrs. Candour, inciting uncontrolled laughter with just a deadpan stare or an unexpected inflection at the end of a sentence.

On the male side of the ledger, the New York stage vets Mark Linn-Baker and Henry Stram deliver as the flustered Sir Peter and Sir Oliver. The younger members of the cast are equally charming, particularly Christian Demarais who brings just the right brio to Charles Surface and Jacob Dresch, a newcomer who's having unabashed fun playing the unctuous Snake.

Red Bull has shown its love for the production with a budget that has allowed for a witty and flexible set by Anna Louizos, whimsical costumes by Andrea Lauer and wonderfully flamboyant wigs by Charles G. LaPointe (Snake's is lime green).

The audience the night I saw the show was surprisingly diverse and genuinely entertained. I bet you would be too.

Labels: The School for Scandal