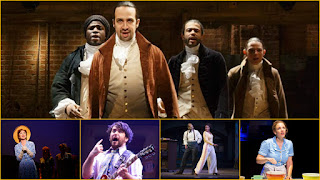 People are always saying "it's an honor to be nominated" when they get a slot on the ballot for a top award like the Tonys. But that's more true than ever for most of the nominees in the musical categories for this year's top theater honors because the one sure bet for the Tony nominations that were announced yesterday morning was that Hamilton was going to get a lot of them. And it did.

The hip-hop-infused musical about one of the previously least known of the Founding Fathers, picked up 16 nominations, the most ever. Four of those went to Hamilton's creator and star Lin-Manuel Miranda for Best Musical, Best Book, Best Score and Best Actor in a Musical.

I'm going to go out on a limb—OK, a very sturdy one—and predict that Miranda and his show will win a bunch of those awards when they're given out at the Beacon Theatre on June 12.

That's left the other 10 musicals that opened this past season struggling for just the honor to be nominated. The consolation prize for the four that made it is the chance to better woo ticket buyers who can't get into the already-sold-out-through-next-year Hamilton but still want the bragging rights of going to a hot show, or at least one warm enough to have picked up the most coveted nomination.

The four that managed to do that are Bright Star (the blue grass musical by Steve Martin and Edie Brickell) School of Rock (Andrew Lloyd-Webber and Julian Fellowe's adaptation of the movie about a rocker turned music teacher) Shuffle Along, Or the Musical Sensation of 1921 and All That Followed (George C. Wolfe's all-star tribute to the show that helped kick off the Jazz Age); and Waitress (singer-songwriter Sara Bareilles' adaptation of the indie film about a woman who bakes her way out of a loveless marriage).

Which means that American Psycho and Tuck Everlasting, both of which recently opened to mixed reviews and middling ticket sales, are going to have a tougher time making a go of it. Disaster, the spoof of '70s disaster movies, has already announced that it will close this weekend.

And although it's been rumbaing along nicely since the fall, I also feel a bit sorry for On Your Feet!, the exuberant bio-musical about the singer Gloria Estefan. It got just one nod for Sergio Trujillo's hip-shaking choreography and surprisingly, at least to me, not one for its terrific leading lady Ana Villafañe.

But there is some welcomed news for the ladies who are in the running for Best Actress in a Musical:  Audra McDonald, the six-time Tony winner and almost never loser, didn't get nominated for her role in Shuffle Along. I haven't yet seen it and so I can't yet weigh in on whether its 10 nominations (second in number only to Hamilton's) were deserving or if Audra got robbed.

However I can say that the nominating committee did a terrific job in the non-musical categories. There's not a ringer in their slate of nominees. And even though Eclipsed and The Humans each drew six nominations, including for Best Play, Best Director and assorted acting categories, those races are wide open. At least I haven't decided how I'm going to vote.

Ditto on the choices for the revivals, both musicals and straight plays (click here to see a full list of all the nominees). And continuing in this feel-good vein, the committee is also to be congratulated on selecting racially diverse nominees in nearly every acting category (take that Oscars) and even in the directing categories, with Liesl Tommy picking up a nomination for Eclipsed and George C. Wolfe picking up his eighth for Shuffle Along.

Of course I don't agree with every single choice the committee made but I agree with so many of them this year that it seems petty to nitpick. Instead, as we've done in past years, my theatergoing buddy Bill and I have recorded a brief conversation in which we shared some more specific thoughts about the nominations—and the Hamilton effect. Click the orange button below to listen in: