The Virile Appeal of "Hold On to My Darling" 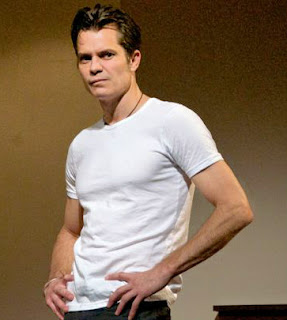 Some men sit through plays with the resigned demeanor of boys serving detention and longing for the school bell to ring. But not the men at the performance I attended of Hold On to Me Darling, Kenneth Lonergan's new comedy that's been extended at the Atlantic Theater Company's Linda Gross Theater through April 17.

Before I even sat down, the man in the seat behind me leaned over to say that it was the second time he was seeing the show because he'd had so much fun the first time. And it apparently amused him all over again cause he roared with laughter throughout the next two hours and 40 minutes.

Lonergan, the author of This is Our Youth and The Waverley Gallery, usually writes about self-involved New Yorkers but this time out he's switched his gaze southward to focus on a self-involved country music star named Strings McCrane.

Strings has been living the high life for two decades, making hit records, starring in action movies and dating starlets and supermodels. But as the play opens, he's been devastated by the news that his mother has died.

By the time he gets to his small Tennessee hometown for her funeral, he's  decided he's going to give everything up, live a simple life and try to find his true self. The trouble is Strings has no clue who his true self is or how to live like anyone other than a big shot who expects to be adored and indulged at every turn.

Lonergan and director Neil Pepe have a good time taking shots at celebrity culture from all angles. Strings exudes faux empathy, calling everyone "darling" but turning every conversation to himself. His assistant Jimmy basks in his glory and fantasizes about the closeness of their relationship.

Meanwhile, the women Strings meets, be it a masseuse at a hotel or his cousin at the funeral parlor, can't resist him or dreams about their future by his side. Only his blue-collar brother Duke remains unimpressed by the singer.

The actors who bring these folks to life are so all-around terrific that it would be unfair not to name check them all. Keith Nobbs is deadpan hilarious as the obsequious Jimmy, C.J. Wilson brings a dry wit to Duke, Adelaide Clemens and Jenn Lyon are winning as the two women who respond in different ways to Strings' considerable charms and Jonathan Hogan is moving in a cameo toward the end of the show.

At the center of it all is Timothy Olyphant, who has made a name for himself in cult TV series such as "Justified" and "Deadwood" and who is pitch perfect as Strings, radiating sensual charisma one minute, pouting like a five-year old the next. But Olyphant makes it clear that Strings isn't unaware of his shortcomings but is as exasperated with himself as everyone else eventually becomes (click here to read a Q&A with the actor).

This all makes for great fun, even though there are all kinds of holes in Lonergan's plot, with some of the developments (including a divorce and a marriage) impossible to pull off within what seems to be just a couple of weeks.

And the play is far too long (a special shoutout has to go to set-designer Walt Spangler and the crew of stagehands for pulling off a series of disparate settings that include the funeral home, a feed store, and an assortment of living rooms and bedrooms). As Hold On to Me Darling moved into its third hour, I began to wonder how Lonergan was going to wrap it all up.

The answer proves to be through an abrupt tonal shift and a literal manifestation of the title that didn't quite work for me but that had many of the men in the audience, including my new friend in the row behind me, sniffling. And at the curtain call, it was, again, the men who leapt up to lead the standing ovation.

Labels: Hold On to Me Darling