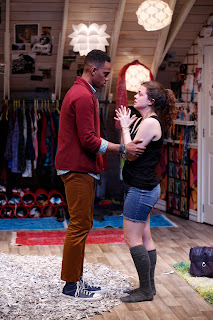 Just a couple of days ago I was yapping on in another post about how "as long as a show is well made, it's OK with me even it if isn't what I think of as 'my kind of show.'" So I suppose I've got to give some props to Lauren Gunderson's I and You, the two-hander that opened at the 59e59 Theaters this week. For even though the show practically put me to sleep, it so earnestly accomplishes what it sets out to do that it has already had 20 productions around the country and won the American Theater Critics Association award for the best play of 2014.

Here's the setup: a teenage girl has a life-threatening liver disease that keeps her at home and a classmate unexpectedly shows up in her room to enlist her help with a homework assignment in which they have to analyze the use of pronouns in Walt Whitman's poem "Song of Myself."

They spar (he's sensitive and black; she's spunky and white) and share (he's into classic jazz; she likes vintage rock) and talk a lot (I mean really a lot) about Whitman. She sometimes yells for her mom who never appears. Then, right before the end of this 90-minute drama, there's a startling revelation that hurls everything that's gone on between them in a wholly different direction.

Under the direction of Sean Daniels, the young actors Kayla Ferguson and Reggie D. White, display an easy rapport with one another but they've been given a big job to do: embody the everyday angst of regular teens, lay the groundwork for the pivotal twist and deliver such highfaluting meditations on Whitman as "So Whitman's 'you' started out as the reader, then became his own soul, then a friend, then the entire planet."

Despite the fact that both actors are reprising performances they've given in previous productions of the play and that Gunderson actually wrote the part for White (click here to read a Q&A with the playwright), they're only partly successful, struggling with the subtext of the piece and compensating by trying too hard to be ingratiating, as though sensing the restlessness of the audience.

Two women, who apparently hadn't read, as I had, that a surprise was coming, actually stood up and walked out during the middle of the performance I attended. Staying might have given them something to debate over a post-show dinner but I'm not sure it would have left them any more satisfied.

Labels: I and You