"The Color Purple" and Its Star are Radiant 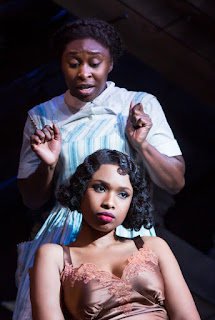 I'm usually no fan of director John Doyle's work. It always strikes me as too self-congratulatory about how clever it is. But Doyle's revival of The Color Purple knocked me out. And that's almost entirely because he had the good sense to cast Cynthia Erivo as the show's star when it played at London's Menier Chocolate Factory in 2013 and to bring the relative unknown here for the Broadway production.

So much of the pre-show publicity for this musical version of Alice Walker's Pulitzer Prize-winning novel about black women who learn how to take possession of their own destinies centered around the casting of Jennifer Hudson, the pop singer and Oscar-winner for playing Effie in the screen version of Dreamgirls, as the free-spirited blues singer Shug; and Danielle Brooks, the Juilliard-trained actress who plays Taystee on the Netflix series "Orange Is the New Black" as the free-speaking Sofia, that I almost forget the story's main character is the much-put-upon Celie.

When the story opens, Celie is 14. Her mother has long died and the man she believes to be her father berates her as ugly and regularly beats and rapes her, giving her two children that he takes away as soon as they're born. Her one solace is the relationship she has with her younger sister Nettie but the father bargains Celie off to a nearby farmer and Nettie runs away when his incestuous attentions turn to her.

The new husband, whom Celie refers to only as "Mister," is just as bad, working her like an animal and sexually abusing her until Shug shows up and begins to encourage Celie to stand up for who she is and what she wants.

As is his want, Doyle has stripped the show down to its elements and this is a much simpler production than the original which opened in 2005. Marsha Norman has done her part by trimming almost 30 minutes from her book, including, thankfully, an unfortunate fantasy sequence in Africa that had me rolling my eyes when I saw it in the original. The size of the cast has also been downsized from 28 to 20.

And, in addition to directing, Doyle has taken on the duties of both choreographer (here called musical staging) and set design (a unit set, dominated by a wall of hanging chairs that the characters unhinge and rearrange in varying combinations to indicate different locations, reminiscent of the approach Susan Stroman used for The Scottsboro Boys.)

This streamlining places all the weight on the music and the performances. And despite slashing the orchestra from 18 musicians in the original production to six in this one, Brenda Russell, Allee Willis and Stephen Bray's score still delivers a soul-satisfying mix of gospel, R& B and power ballads.

And the cast is terrific from the smaller featured roles (Joaquina Kalukango as Nettie; Kyle Scatliffe as Sofia's henpecked husband Harpo) straight through to the big marquee names.

Hudson and Brooks, both making their Broadway debuts, don't let their fans down (click here to read an interview with Hudson). They look to be comfortable onstage and sing the hell out of the songs they've been given. Brooks is particularly winning—earthy, funny and, when needed to be, poignant—in the role that Oprah Winfrey played in Steven Spielberg's movie version of Walker's book.

But it's Erivo as Celie who is truly sensational. Broadway favorite LaChanze won a Tony for her portrayal of Celie in the 2005 production and "American Idol" winner Fantasia Barrino won big kudos when she stepped in as a replacement. But both women emphasized the wounded bird aspect of the character.

Erivo, by contrast, imbues the character with an innate grit that makes it clear how she could withstand so much maltreatment and yet emerge from it with such a strong sense of self (click here to read a profile of the actress).

Her Celie is helped by Shug's advice and by the example of her friend Sofia but you never doubt, from the glee in her eyes when she fetches Mister's father a glass of water and spits in it before serving it to him to the upthrust of her chin after being slapped, that the inner dignity is always there inside her. Which makes the celebration of its total emergence all the more sweet.

Plus Erivo can sing. When she finished her 11 o'clock anthem, "I'm Here," the audience at the performance I attended couldn't stop clapping. Really. People cried, cheered and stomped their feet for about two solid minutes.

A woman two seats away from me started waving her hands in the air like someone who had caught the spirit at a church revival. And, although we both tend to be far more guarded about showing our emotions in public, my niece Jennifer and I cheered right along with the rest of them.