"These Paper Bullets" Hits the Mark 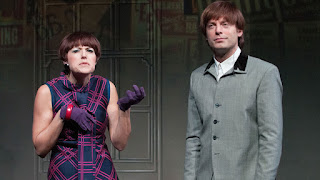 There's an affinity between Shakespeare and music that rivals the synchronicity between peanut butter and jelly. Sometimes what results is lip-smackingly good like Kiss Me Kate, Cole Porter's take on The Taming of the Shrew. Or West Side Story, Leonard Bernstein and Stephen Sondheim's update of Romeo and Juliet. Or even The Lion King, Elton John and Tim Rice's riff on Hamlet.

Other times, the outcome is icky sweet or stuck-to-the-roof-of-your-mouth awkward, like Rockabye Hamlet, which lasted just seven performances; or All Shook Up, the mix of Twelfth Night and Elvis Presley songs that limped along for six months in 2005 (click here to see a photo gallery of some hits over the years).

And now we have These Paper Bullets!, a mash-up of Much Ado About Nothing and Beatles-inspired songs written by Green Day's Billie Joe Armstrong, which is playing at the Atlantic Theater Company's Linda Gross Theater through Jan. 10.

The mainstream critics haven't been taken with These Paper Bullets! and the show eked out a ho-hum 61 on a scale of 100 from the review aggregator Show-Score (click here to read some of what they had to say). But, to my delight, I had a good time.

Book writer Rolin Jones has moved the Bard's comedy about the romances of two very different couples to the London of the Swinging Sixties. Jones peppers his adaptation with lines from the original (the title is taken from a speech in the play) but the real fun is the way he incorporates the attitudes and lingo of that era (the look too: the dandified suit jackets and mini-skirted dresses that Jessica Ford has created are totally groovy).

Jones has transformed Shakespeare's central couple, the high-minded nobleman Claudio and his lady love Hero, into Claude, the cute-one in a world-famous band (slyly named The Quartos) and his fiancée Higgy, a world-famous fashion model, whose named is a play on that era's waif-thin supermodel Twiggy.

But as always, it is the love-averse duo Beatrice and Benedick who are the show's true stars. Here, they are Bea, a tart Mary Quant-style fashion designer who is Higgy's bestie; and Ben, the ironic John Lennon-like leader of The Quartos.

Jones finds counterparts for Much Ado's other characters as well (click here to read more about how he put it all together). His most clever invention may be Don Best, the drummer who left The Quartos before the band hit big, a tongue-in-cheek nod to both the Beatles' first drummer Pete Best and the original play's villain Don John, who attempts to undermine the marriage between Claudio and Hero by making false accusations against her.

Armstrong, whose music from the album "American Idiot" was turned into a Broadway show back in 2010, has gotten into the Swinging spirit as well. His impish songs, smartly arranged by Tom Kitt, are a delightful homage to the pre-Sgt. Pepper's Beatles and had me bouncing along in my seat even if I can't remember any of the tunes now.

The four-member band, which includes Bryan Fenkart as Claude and Justin Kirk as Ben, plays its own music and does it well. Fenkart is also touching in the scenes in which Claude doubts Higgy's faithfulness. Meanwhile Kirk, a master of the charming smirk, makes Ben the coolest dude for miles around (click here for a video essay by him).

The women are good too. Nicole Parker is particularly pert and snappy as Bea. And she and Kirk spar well, an essential ingredient for any successful version of Much Ado About Nothing.

But the biggest kudos go to director Jackson Gay who, in the anything-for-a-laugh spirit of the Beatles mockumentary "A Hard Day's Night," uses everything she can think of—terrific video projections of the period, some mild audience participation and a drag Queen Elizabeth—to create the show's jovial mood.

Some of the antics are sophomoric and the show goes on longer than need be. But the unabashed desire by everyone involved to give the audience a good time left me with a grin on my face.