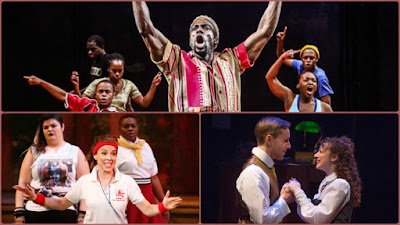 Not everyone is a theater fanatic like me and my buddy Bill who are so crazy about theater that we will see—and have seen—just about anything. When most people think about seeing a show, their thoughts, particularly during the holiday season, often turn to musicals. Which is why all of the shows that took in over $1 million during Thanksgiving week were song-and-dance shows, with three of the splashiest—Aladdin, The Lion King and Wicked—taking in over $2 million each.

But there are musicals off Broadway too. They tend to be a lot smaller, more idiosyncratic and cheaper (tickets cost half as much as the Broadway shows, or even less). A few of these productions, like Fun Home and Hamilton, later transfer to the big time, giving the folks who saw their earlier productions bragging rights about getting to them before everyone else.

I'm going to indulge in a little bragging of my own right now. I've seen four off-Broadway musicals over the past couple of weeks (although I can only talk about three of them now because the fourth, Lazarus, hasn't yet officially opened and so more about that next week).

In all honesty, I don't think any of them will make it to Broadway and give me bragging rights but, in various ways, each offers some sense of the way the musicals winds are currently blowing. 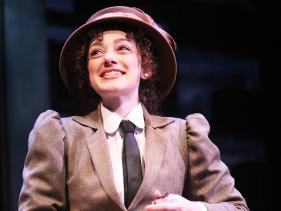 DADDY LONG LEGS: There's a sweet old-fashioned quality about this two-hander based on the 1912 epistolary novel about a smart orphan named Jerusha Abbott, who is sent to college by an unknown benefactor. There she grows into a feminist, a socialist and a woman in love, all of which she chronicles in letters to her fairy godfather, whom she calls Daddy Long Legs because she caught a glimpse of his tall figure leaving the orphanage where she was raised.

The novel with its feisty heroine was one of the few books that I read over and over again when I was a girl and so I was really curious to see this show because although the story has been adapted for the screen, including a 1955 Fred Astaire musical, I couldn't imagine how a collection of letters could be turned into a stage musical, particularly when it had only two actors and the very tiny stage of the Davenport Theatre to work with.

John Caird, the mastermind behind literary page-to-stage blockbusters like Nicholas Nickelby and Les Misérables; and composer and lyricist Paul Gordon, a Tony nominee for his collaboration with Caird on Jane Eyre back in 2000, have attempted to solve the problem by staging the nearly all sung-through show as a series of musical soliloquies.

Like so many in his generation of composers, Gordon has created a score that is heavily influenced by Stephen Sondheim. The melodies aren't as complex and the lyrics aren't are as clever as Sondheim's (whose are?) but the songs are pleasant and they're beautifully song by the real-life husband and wife team of Adam Halpin, who's now replaced Paul Alexander Nolan, and Megan McGinnis, who has been with the show from its start (click here to read about the couple).

The critical response to Daddy Long Legs has been tepid, rating barely a passable 66 on Show-Score. and the producers have already announced that the show is closing on Jan. 10.* But you wouldn't have known any of that based on the reactions of the row of school girls who sat in front of me. They were totally enthralled, sighing and crying their way to the show's predictable but still romantic conclusion.

You'll have the chance to make up your own mind about Daddy Long Legs because the show will be live-streaming on Dec. 10 at 8 p.m. in many time zones.  The viewing is free but you do have to register beforehand, which you can do by clicking here. 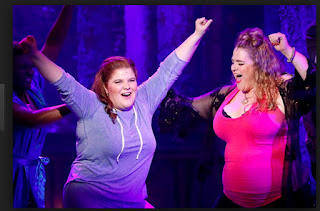 GIGANTIC. The New York Musical Theatre Festival, or NYMF as it's known, may be having as big an influence on the new generation of musicals as Sondheim does. Unfortunately for me, the festival's programmers seem to have a weakness for puerile subjects, potty-mouthed humor, generic pop-rock scores and parodies of much better musicals.

A show called Fat Camp was a big hit of NYMF's 2009 season. And now, renamed Gigantic, it's running in a Vineyard Theatre production at the company's temporary home at the Acorn Theatre on Theatre Row through Dec. 20. It has a book by Randy Blair and Tim Drucker, music by Matthew roi Berger, lyrics by Blair and the desire to be one of those self-esteem shows that encourages people to feel good about themselves, whomever that self may be.

In this case those selves are teens who have been sent to a weight loss camp. And that creates a dilemma for the show: it doesn't want to make fun of overweight people but it also finds it hard to resist fat jokes (there are several scenes in which director Scott Schwartz has guys taking off their shirts and jiggling their flesh in a way that's an obvious bid for cheap laughs).

Several members of the cast are making their professional debuts and, from the remarks in their program notes and the genuine giddiness they display onstage, they're delighted to have this chance to show off their talent. And there are moments when they do so engagingly, as in a Hamilton-style homage to the nation's heaviest president William Howard Taft. More bright moments like that might have kept those insiders in their seats. 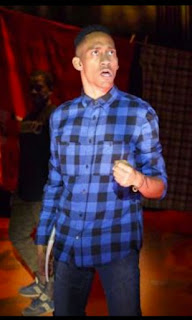 INVISIBLE THREAD: Actors who tire of waiting for their big break often try to create their own. That usually means self-producing a modest one or two person show. But the show Griffin Matthews and Matt Gould have put together has 15 cast members, a dozen musicians and big production numbers staged by the Tony-nominated choreographer Sergio Trujillo and directed by Tony-winner Diane Paulus.

Inspired by its creators' own experience, Invisible Thread, which is playing at Second Stage Theatre through Jan. 3, tells the story of a gay African-American actor named Griffin who, unable to find work and disowned by his church for his sexuality, seeks solace and a better sense of himself by volunteering in, of all places, Uganda.

The situation on the ground isn't what he expected but Griffin finds another mission when he becomes a surrogate parent to a group of AIDS orphans. After his Jewish boyfriend joins him in Uganda, they agree to take on the responsibility of educating the kids and set about raising the money to do the job.

In [title of show]'s meta fashion, the show that Matthews and Gould have created to tell the story of the young people they've adopted is also a way to fund their efforts to help those young people (click here to listen to a radio interview with the couple).

But the show's scenario sounds a lot more somber than the actual show proves to be. This is a genuinely appealing show even if the storytelling is a little muddled.

Matthews is a particular charmer playing a fictional version of himself. And the show is filled with fish-out-of-water humor as Griffin tries to connect to his African roots and peppy music (plus a few ballads, including the title tune about the invisible thread that connects Griffin and his students).

And not everything turns out according to the playbook for these kinds of shows. Invisible Thread offers some pointed observations about the assumptions that westerners, white and black, too often make about Africa, even if the show indulges in a few of its own.

There are plenty of energetic dance numbers but not even the gifted Trujillo seems to have found a way to avoid the butt-jutting and breast-thrusting gyrations that too frequently pass for African dance in musicals.

Paulus is a master orchestrator of onstage fun and here she borrows a little from The Lion King and a little from The Book of Mormon, filters them through her own fertile imagination and then seasons the mix with techniques ranging from arty video projections to simple hand clapping. And yet she gives into another cliché: soulful numbers belted by a large black woman with an even larger voice.

Still, it's hard to complain when you leave a show feeling good and knowing that your ticket price may be doing some good too. It's kind of what the holidays are all about.

*The Daddy Long Leg producers say the show has been "extended  to run indefinitely."