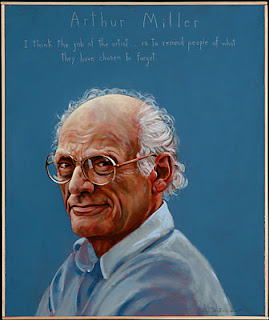 This year marked the centennial of Arthur Miller's birth and for my money, not enough attention has been paid. Sure, there have been a few productions. Both the Nashville Repertory Theatre and the New York Yiddish Rep. have done revivals of Death of a Salesman and the Seattle Rep. did one of A View From the Bridge earlier this fall. Special editions of his plays have been published by Penguin and the Library of Congress and some symposia have been held here and there, including one at the University of Michigan, Miller's alma mater.

But Miller sits on the Mount Rushmore of American playwrights alongside Eugene O'Neill and Tennessee Williams and theater companies around the country should have been putting on not only his major plays but lesser-known works like The Ride Down Mt. Morgan, which marked his last original Broadway production in 2000 and Finishing the Picture, which premiered at the Goodman Theatre in Chicago just four months before Miller's death in 2005.

Instead, New York theater lovers who revere Miller (as I have since I first wrote a paper on his work in high school) have had to content ourselves  with the Signature Theatre Company's respectful revival of Incident at Vichy, which is running on its Irene Diamond Stage though Dec. 20; and the revelatory new staging of A View From the Bridge at the Lyceum Theatre through Feb. 21. 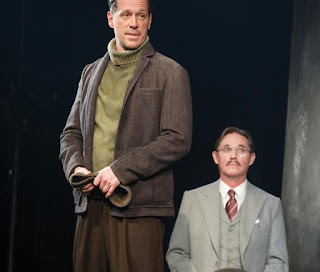 Incident at Vichy, which was first done in 1964, is set in Nazi-occupied France and opens in a makeshift detention room where a group of men anxiously await questioning by the German officials who have rounded them up. They suspect they have been identified as Jews and, as they are called into the interrogation room one-by-one, debate how they can avoid what is destined to be a tragic fate.

Some are resigned to whatever will happen. Others believe they can appeal to reason. One or two hope to use money or personal connections as leverage. A few argue that they should try to overwhelm the guards and make a run for it. The sole gentile among them knows he has been picked up by mistake and will be released but doesn't know what obligation he has to the others.

The play is, of course, an allegory for how Jews and gentiles responded to the Holocaust (click here for a piece further examining the playwright's feelings about that). But it's also one of Miller's meditations on the moral responsibility we have to one another and to ourselves. Plus it's a trove of great parts for actors.

The waiting men range in age from a teen boy to a character identified only as the Old Jew. They come from professions that run the gamut from artist and philosophy professor to laborer and street thief. And their political beliefs are just as varied. That's a lot of humanity to crowd into 90 minutes and so the actors playing the parts have to create full lives and to make potentially polemic dialog sound like natural speech.

And that's exactly what happened in the superbly performed production that The Actors Company Theatre staged back in 2009. I believed in every character and I felt the horror as each disappeared into the interrogation room (click here for my review). But, under the unsteady direction of Michael Wilson, the acting is more of a mixed bag in the new Signature production.

Several of the cast members—Jonny Orsini as a hotheaded artist and Darren Pettie as the professor instigating the revolt—are too contemporary for their roles. Richard Thomas, the best known of the 17 actors, brings nice touches to the gentile nobleman but none of the innate hauteur that the character would have, which softens not only his story arc but the emotional center of the play.

Oddly, James Carpinello comes off best as the German officer made soul sick by the assignment he's been given. And I'm not sure that the guy wearing the swastika should be the most sympathetic character in a play in which other people are condemned to wear the yellow star that will symbolize their doom. 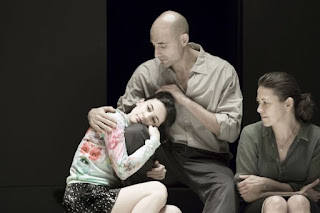 However, I have no ambivalence abut the innovative production of A View From the Bridge that was first done by The Young Vic in London. It's been directed by Ivo van Hove, the avant garde Belgian director who has been much celebrated for reinventing rather than revising classic plays (click here to read a profile about him).

Van Hove strips Miller's tragedy about a dock worker undone by an illicit obsession with his surrogate daughter down to its bare essentials. Although the play is set in the Red Hook section of Brooklyn in the 1950s, the actors wear nondescript modern dress and don't even bother with shoes. And there are no traditional sets or props; instead there is a bare playing space, bordered by a Plexiglas bench and bleacher seating for about 150 audience members who serve as the de facto community (click here for a piece on the making of the show).

The absence of the traditional stagecraft focuses all the attention on the text and the actors bringing it to life. The result is something akin to what watching an original production of a play by Sophocles must have been and makes me sorry I didn't get my butt over to BAM to see van Hove's production of Antigone earlier this fall.

Miller modeled A View From the Bridge after classic Greek tragedy. The lawyer who serves as the neighborhood fixer also functions as the drama's narrator and one-man chorus. But the central figure with the fatal flaw is Eddie Carbone, a seemingly good man who works hard as a longshoreman, has raised his orphaned niece and opens his home to illegal immigrants from Italy desperate to find work in this country.

But a romance between the niece and one of the immigrants stirs up Eddie's own repressed longings for the girl, eventually causing him to break some of his community's most sacred taboos. The trick in playing this part is to maintain the believability of the character's innate belief in his goodness even when he does bad things. Mark Strong is magnificent in the role.

Lanky, ball-headed and wielding an authentic-sounding Brooklyn accent, his Eddie seems like a solid guy at the beginning of the play but as the story progresses and Eddie becomes more and more obsessed, Strong somehow manages to hollow him out: his face becomes more gaunt, his eyes vacant as though life is being sucked out of him. It's hard to imagine that there will be a finer performance this season (click here to read an interview with him).

The  Brooklyn accents of Strong's fellow British cast-members aren't as reliable as his but their acting certainly is. I'm reluctant to single out any of them but Nicola Walker is a quiet powerhouse as Eddie's wife Beatrice, who, unlike her husband, sees the tragedy hurtling toward them but is still unable to get them out of its way.

Making his Broadway debut, van Hove does permit himself a couple of directorial flourishes. A perhaps too-emphatic soundscape by Tom Gibbons mixes samples of Fauré's "Requiem" with hisses and thumps that combine into an aural sense of dread that underscores the mythic intensity of the plot as it races along for nearly two hours without intermission.

There's also a coup d’theatre in the final moments of the play that earns its showiness. Both my husband K and I left the theater feeling simultaneously drained and exhilarated. And now we're counting the days until we can see what van Hove does with Miller's The Crucible, which is scheduled to open on Broadway with an all-star cast in April.

Labels: A View from the Bridge, Incident at Vichy