"The Wild Party" is Way Too Mild 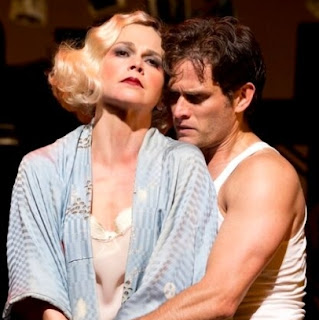 Right before my husband K and I went to see the Encores! Off-Center production of Andrew Lippa’s The Wild Party, I re-read the 1928 narrative poem on which the musical is based. I found it to be amusing, clever and surprisingly sexy. Alas, I didn’t find any of those qualities in the show, which ends its five-performances run at City Center tonight.

The poem was written by Joseph Moncure March, a Robert Frost protégé who was an early staffer at The New Yorker magazine, helped create its Talk of the Town section and had first hand-knowledge of the louche Jazz Age scene March’s poem describes.

The Wild Party's primary story centers around the beautiful and promiscuous vaudeville dancer Queenie and her boyfriend, a temperamental clown named Burrs.They’re the proverbial couple who can’t live with or without one another and that dangerous dynamic is played out in the titular soiree they host.

The book's guest list includes a bickering gay couple (barely acknowledged in the show), a dim-witted boxer and his floozy, a lesbian stripper and Queenie’s frenemy, a good-time gal named Kate who brings along a date named Mr. Black. He falls hard for Queenie. Trouble ensues when she finds herself falling for him too.

The poem's depiction of people who indulge freely in booze, drugs and all kinds of couplings was considered so scandalous when the book came out that it was banned in Boston, which gave it a brief cachet before it was largely forgotten.

But it became hot again in the 1990s when the poem, by then in the public domain, was republished with illustrations by the cartoonist Art Spiegelman and turned into two separate musicals by Lippa and Michael John LaChiusa.

Both composers did their own librettos (although George C. Wolfe helped with LaChiusa’s) but neither totally cracked the challenge of moving the poem from the page to the stage. Still, both versions debuted in the spring of 2000 and although neither was a hit, the score for each has developed cult status over the years (click here to read more about that).

LaChiusa’s version, which had a brief run on Broadway, is usually considered more ambitious and expansive. But Lippa’s is seen as more accessible and the fact that his show was produced by Manhattan Theatre Club made it a perfect choice for the Encores! summer series which spotlights off-Broadway musicals.

The unusually large number of twentysomethings who turned up in the audience for Thursday night's performance—and cheered loudly throughout it—suggests that Lippa's version has become a particularly revered totem for the new generation of musical theater geeks who probably discovered the cast album in high school and then cast themselves in the show once they got to college.

As always, Encores! has recruited big names for its production. Sutton Foster, decked out in a blonde wig and swanky gowns designed by Clint Ramos, plays Queenie. Steven Pasquale, looking heavier than I remember but still hunky, plays Burrs. And the rising star Brandon Victor Dixon completes the triangle as Mr. Black.

These are three of the best voices now in the business and the singing was uniformly terrific. The problem for me is that the actors are miscast and, perhaps because of the notoriously short rehearsal period for Encores! shows, haven’t figured out a way to compensate for that. And neither Leigh Silverman's turbid direction nor Sonya Tayeh's manic dance numbers give them any help.

There’s an intrinsic spunkiness in Foster that was evident even when she played the mutilated young woman in the revival of Violet that was part of the inaugural 2013 season of Encores! Off-Center. But Queenie, always desired for her beauty, bored with the life that it has brought her but afraid to change, is as far away from spunky as you can get and Foster shows none of her despair. Even the new curtain closer that Lippa has written for her fails to reveal it.

Burrs meanwhile is the classic creepy clown. He brutalizes Queenie one minute and clings desperately to her the next. Both Brian D’Arcy James in Lippa's original production and Mandy Patinkin in LaChiusa’s brought a scary volatility to the role but Pasquale plays Burrs straight down the middle, which saps the tension out of his relationship with Queenie and out of the show. Similarly, Dixon looks the part of the seductive Black but radiates no heat.

The best performances come from Joaquina Kalukango, who gives Kate an appropriately loose and bluesy sassiness, and Miriam Shor, the original Yitzhak in Hedwig and the Angry Inch, who stops the show with the lesbian’s lament for “An Old-Fashioned Love Story.”  Their moments brought some much needed pizazz to what otherwise turned out to be just a run-of-the-mill party.