Why “Happy Days” is Happy Theatergoing 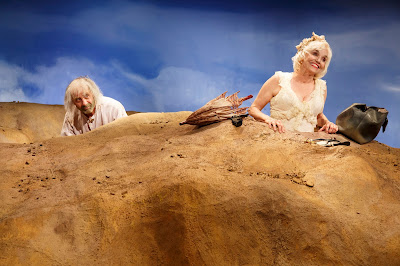 Having never seen Samuel Beckett’s Happy Days, I approached the production that’s now playing at The Flea Theater through July 18 in the same way that many people approach a bowl of Brussels sprouts: dubiously, but feeling as though it's something I should try because it would be good for me.

But as all but the most die-hard carnivores have discovered, Brussels sprouts, when prepared well, can be delicious. And I came to a similar conclusion about this appealing version of Beckett’s meditation on human resilience in the face of existential adversity.

Happy Days famously opens with a woman stuck waist-high in a big mound of dirt. Unable to move, she still goes through a morning routine of saying a prayer, brushing her teeth and otherwise preparing for the coming day, even though no one ever visits and her only companion is her near-mute husband Willie who spends most of his time in a hole on the other side of the dirt pile.

Undaunted, the woman, her name is Winnie, fills her time with ceaseless chatter and grabs even the slightest reason to proclaim, “Oh, this is a happy day.” But that sunny outlook is put under even more pressure in the second act. The sight of the new challenge prompted an audible “Oh no,” from one man in my audience, who, apparently like me, had never seen the play before but had become totally wrapped up in it.

Beckett, the high priest of existential despair, is said to have written Happy Days in response to his wife’s request that he write a happy play. And in odd ways, it is optimistic. Endless playwrights have tried to imitate Beckett over the years but while they can set their characters in preposterous situations and give them witty things to say, very few have figured out how to imbue them with the humanity that animates even the most absurd of Beckett’s works.

His Winnie is a stand-in for all of us who soldier on, knowing that, ultimately, we will lose in the game of life but find solace in our rituals, our dreams and the connection, no matter how tenuous, to one another. Maybe it’s because I have a big birthday on the horizon but Winnie’s indomitability in the face of her approaching mortality moved me greatly.

Talking for almost two straight-hours, without being able to move or even, at times, to gesture, Winnie is a monster of a role and although Brooke Adams has spent far more time doing movies and TV than theater, she proves she’s up to the task (click here to read an interview with the actress).

Adams is still achingly lovely but now 66, she gives a vanity-free performance—flaunting her flabby arms and not-so-pert breasts—that cuts to the heart of the play, and of those of us watching it.

Her Winnie can be as perky as a '50s-era sitcom mom but she’s not unaware of her situation and there are times when she almost succumbs to the encroaching despair. But then she summons up her courage and carries on a little while longer.

Willie is played by Adams’ real-life husband Tony Shaloub. It’s a small role and most of its dialog is conveyed in grunts and physical bits of business. But Shaloub, an inveterate scene stealer who can’t help himself even when the person he’s robbing is his own spouse, is terrific.

And Andrei Belgrader’s direction is as light on its feet here as it was flatfooted in CSC’s recent production of Doctor Faustus (click here for my review of that one). Everything—the set, the lighting—is rendered slightly artificial, underscoring the metaphorical while simultaneously anchoring the play in the real.

The ending of Happy Day is purposefully ambiguous but Adams and Shaloub give it a hint of hopefulness that might disappoint ardent Beckettists but that would probably please the determinedly sanguine Winnie as much as it did me.