"Three Days to See" is Too Nearsighted 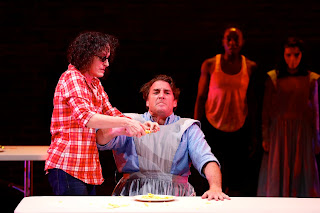 The title of the new play Three Days to See comes from a 1933 magazine article in which Helen Keller, blind and deaf since she was a toddler, wrote about what she’d do if given just 72 hours of sight (click here to read what she wrote).

Born to a landed southern family (her father fought for the Confederacy) Keller contracted a disease when she was 19 months-old that left her unable to see or hear. When she was six her desperate parents hired a young teacher named Anne Sullivan to help find a way for the child to communicate with her family.

Sullivan famously worked miracles and by the time Keller was 24, she had graduated from Radcliffe, become friends with people like Mark Twain and Alexander Graham Bell and written the first of what would turn out to be three autobiographies.

But the Transport Group’s look at her life, which opened at Theatre 79 on Sunday, is no traditional bio-play. Instead, Transport’s artistic director Jack Cummings III, who devised and directed the piece, has cast seven actors to play Keller.

Differing in gender, ethnicity, size and even acting ability, they take turns reciting dialog based on the writings she published over the years, plus a prologue of bad-taste Helen Keller jokes like “'How did Helen Keller meet her husband?' 'On a blind date.'"

I’m not sure why Cummings decided to do this piece. Although Keller, who died in 1968 at the age of 87, was once a prominent inspirational figure in popular culture, she is probably now best known as the subject of The Miracle Worker, William Gibson’s 1959 play, and its subsequent movie, in which Anne Bancroft and a young Patty Duke enacted the breakthrough moment when young Helen realizes that the signs her teacher is tracing in her hand are the word for the water that is running across her arm.

Three Days to See has no such cathartic moments. Instead, Cummings seems to feel it important that the audience know more about the grown-up Keller and he hits hard on the facts that she had a sex life and leftist political views that included feminism, socialism and workers’ rights (click here to read more about how he put the show together).

But Cummings, whose sympathetic reimagining of I Remember Mama was one of the best things I saw last year (click here for my review of it,) somehow seems to have forgotten that most theatergoers expect more than a recitation of lines on a bare stage, except for some folding chairs and tables, and delivered by actors wearing modern-day street clothes.

He tries to make up for the lack of action with some busy stagecraft. Self-consciously choreographed movements are set to an eclectic underscore that includes snatches of Arlen, Ellington, Ravel, Satie and Rodgers and Hammerstein.

A bit of tension is introduced in a food fight as Sullivan struggles to teach her young charge how to eat properly. And an attempt at humor comes in intermittent references to Keller’s fondness for the novel “Gone With the Wind.”

All of it is repeated over and over, until the intended effect is pretty much muted. The play lists its running time as 100 minutes, ran two hours at Friday night’s performance and felt a whole lot longer.

However the final moments, taken from the title essay, were moving. And in the days following, I have begun to look at the world slightly differently, grateful that I have the ability to see it.