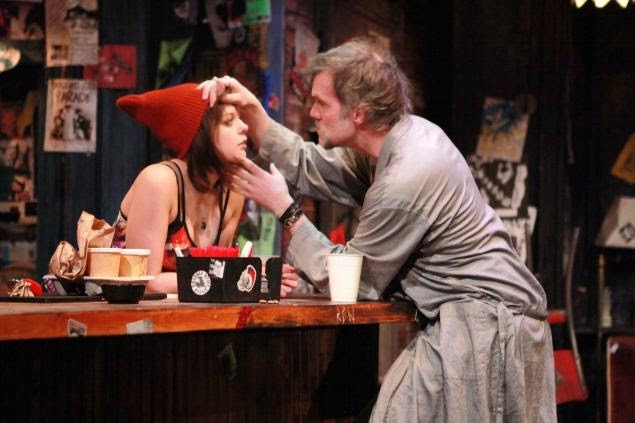 The bathroom at the Rattlestick Playwrights Theater is a tiny space that sits between the backstage and the audience and that can accommodate just a couple of people at a time and so there’s usually a line of people waiting to use the facilities as you enter the small theater and the show can’t begin until the last person has finished his or her business.

It took nearly 15 minute for everyone, including the woman sitting next to me who waited until the last minute to jump up and go, to cycle through Tuesday night.  Luckily, the show, Laura Eason’s The Undeniable Sound of Right Now, turned out to be worth the wait.

Set in 1992, it centers around a father and daughter who really love one another and openly show it. The father in question is Hank, a former musician who runs a Chicago bar that has served as an incubator and playground for legions of rock bands, some now famous. As the club nears its 25th anniversary, Hank remains a fierce defender of that music even as tastes have changed and customers have begun to drift off elsewhere.

His daughter Lena was raised by Hank and a loving step-mom Bette in an apartment over the bar after her birth mother OD’ed on heroin. Now in her early 20s, Lena adores her dad and his music but is also drawn to the more contemporary sounds of hip-hop and to a brash young DJ named Nash.

Adding to the tensions are Toby, the nerdy bartender who not so-secretly pines for Lena, and Joey, the landlord’s slimy son, who openly yearns to renege on the handshake agreement between his dad and Hank, close the bar and move in a more upscale tenant who can pay a higher rent in the now-gentrifying neighborhood.

But the biggest tensions are the ones that exist between art and commerce—and love. Is Nash really into Lena or does he just want the boasting rights of a gig at Hank’s legendary bar? Will Hank be a sellout if he plays hip-hop in his rock club? Should Lena accept Joey’s offer to sleep with him in exchange for a cheaper rent?

As she did in the wonderfully nuanced Sex With Strangers (click here for my review) Eason refuses to settle for easy solutions. And, also as with the earlier play, her quest to work out some answers has elicited an excellent production.

Director Kirsten Kelly and her design team do wonders with the small stage at the Rattlestick, creating a bar so authentic looking that you can just about smell the reek of beer and marijuana and they almost make an offstage rave seem real.

The casting is pitch perfect. Jeb Brown, so good as the leisure-suit wearing record producer Don Kirshner in Beautiful, The Carole King Musical, now convincingly embodies the bodacious swagger of the aging rocker who still looks great in tight jeans and comes most alive when he's tearing into riffs on an amped-up guitar.

A special shout-out also has to go to Lusia Strus, whose Fran Descher-like inflections provide a lot of the laughs as Hank’s ex-wife and Lena’s stepmom, but who also manages to leaven the humor with streaks of the pathos that linger in a woman who can’t live with or without the same man.

The early reviews of The Undeniable Sound of Right Now have been largely so-so. Which isn’t surprising. Dysfunctional families tend to dominate most modern plays and the more outrageous or weird they are, the more most critics seem to admire them. But I found it a welcome change to get a play like this in which the main characters genuinely like and care about one another.

That doesn’t mean that everything is all boringly hunky-dory either. For Eason knows how to create affecting plays with people who, although they care about one another, don’t always see eye-to eye, occasionally get on each another’s nerves and sometimes hurt one another. But still love one another. Just like in real life.