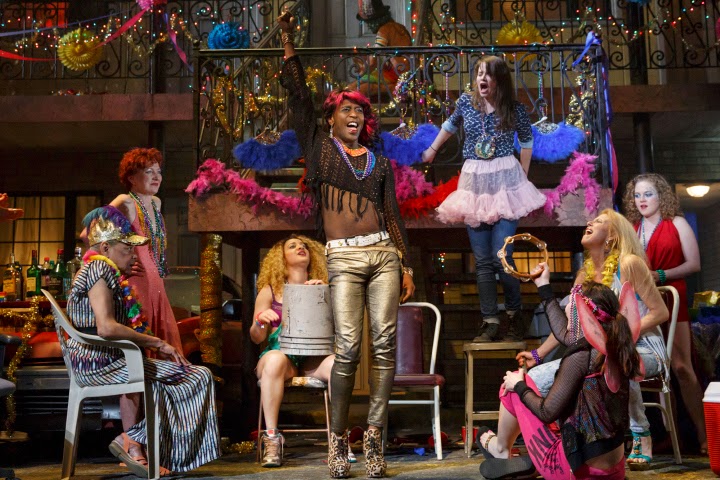 There is a direct line connecting the down and outers waiting for Hickey in The Iceman Cometh and the outcasts who gather in the parking lot of the Hummingbird Motel for the premature funeral of their den mother in Airline Highway, an incredible new play by Lisa D’Amour that Manhattan Theatre Company opened Thursday night at its Samuel J. Friedman Theatre.

Airline Highway is set during Jazz Fest, the high-spirited music and culture festival that has drawn hundreds of thousands of people to New Orleans each spring for the last 45 years. But the folks who hang around the seedy Hummingbird, situated on the titular highway that connects the city and its airport, are as faraway from the romantic fantasy of the Big Easy as you can get.

Among them are Tanya, the aging hooker who has lived—and turned tricks—at the Hummingbird for years; Krista, a younger stripper who’s recently been evicted because she's not earning enough to pay her rent; Sissy Na Na, a sassy (is there any other kind) drag queen; and Miss Ruby, the old and ailing burlesque queen who has requested a funeral before she dies so that she can hear the nice things people will say about her when she’s gone.

Unlike the Iceman crew, these folks don’t have delusional pipe dreams. They know they’ve fallen to the underside of the American Dream, know how hard it’s become for people like them to have any kind of dream and are just trying to survive.

The arrival of a Whole Foods in their gentrifying neighborhood doesn’t signify an opportunity to get fresh vegetables and gourmet cheeses but just the distressing fact that there's one less place where they can buy cheap groceries.

And when an outsider bearing a platter of sandwiches from Whole Foods arrives at the wake, he unsettles them precisely because he is the exception to the rule that says there’s no hope of making it over to the other side.

That outsider is Bait Boy, Krista’s former lover. He’s gotten over by taking up with a successful realtor in Atlanta and now lives in her nice home, instead of a pay-by-the-week flophouse like the Hummingbird. He wears preppyish khakis and shirts and asks his old friends to call him by his real name, Greg.

Greg has also brought along his teenaged stepdaughter who is doing a school paper on what she calls subcultures and is eager to interview the Hummingbird residents. Their reluctant answers to her questions become soliloquies about the mishaps that have brought them to their current sad state.

Those speeches go on admittedly too long. But they’re also a needed reminder that the folks at the margins of society—the panhandlers, the people pushing shopping carts filled with the odds and (mainly) ends of their lives—are real human beings who, as my mother used to say, only by the grace of God, might be us.

The 16-person cast is outstanding. And the invaluable Joe Mantello proves a master of this kind of crowd control. There are moments when several conversations are going on at once, with lines of dialogue overlapping one another Robert Altman-style. And yet everyone, even those in the background ensemble, gets a moment to shine and does so.

Among the brightest are K. Todd Freeman, who does the most anyone can with the stock role of the black drag queen, and Judith Roberts, elegant and elegiac as Miss Ruby, a dream part for actresses of a certain age. In fact, I couldn’t help wondering what the hell Elizabeth Ashley’s agent was doing when the script was making the rounds cause it would be a fabulous role for her.

Still, it’s hard not to single out Julie White, so often brought in for her dry comic timing but here heartbreaking as Tanya, who is haunted both by the mistakes she made in her past and the ones she knows she won’t be able to avoid in her future (click here to read an interview with the actress).

D’Amour's family goes back five-generations in New Orleans (click here to read an interview with her) and she displays a fierce pride in her characters and in her hometown's traditions (there’s even a funeral parade, complete with music and undulating umbrellas). She may sentimentalize a bit but she doesn't condescend. And this isn't a total wallow in misery; there's plenty of buoyant humor.

For D'Amour is comfortable in the world of the have-nots. Her earlier play, Detroit focused on the downward mobility of middle-class suburbanites and it drew big praise from the mainstream critics when it was produced at Playwrights Horizons in 2012.

But many of those critics have been far less enthusiastic about this one, dismissing it as derivative, a word that somehow rarely gets used when talking about the scores of plays about middle class ennui that are turned out and produced year after year.

I was much cooler on Detroit (click here to read my review) but, as you can probably tell, I'm fired up about this this one. Like Iceman, American Highway is a big bruiser of a play, sympathetic to society's most wounded. And for me, it hurts in all the right ways.