"Fish in the Dark" is Light But Satisfying 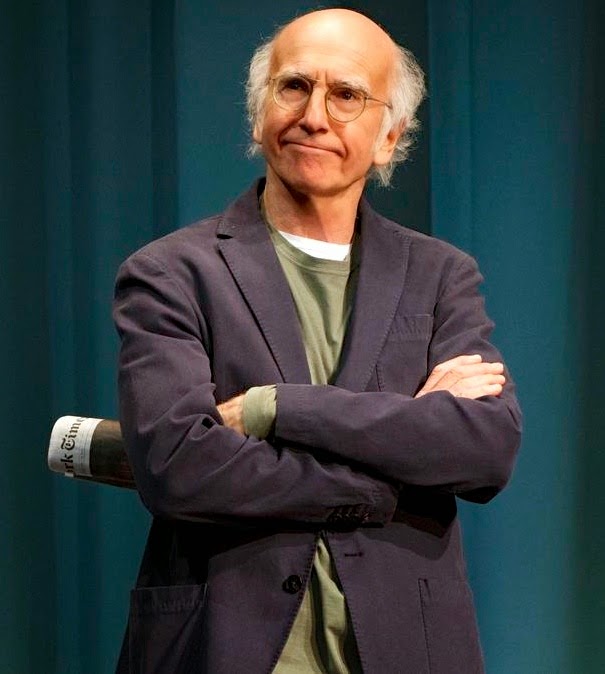 By all accounts (and there have been many of them; click here to read one) Larry David didn’t intend to star in Fish in the Dark, the new farce that is playing at the Cort Theatre. But the show’s lead producer Scott Rudin is no dummy. In contrast to the producers of The Last Ship, which flailed when it failed to put its author, the musician Sting, in the show, Rudin insisted that David, the co-creator of “Seinfeld” and the creator and star of “Curb Your Enthusiasm” had to be front and center in his debut play about a family’s comic reactions to the death of its patriarch.

The thin plot revolves around the struggle to divvy up the possessions (including the widow) of Sidney Drexel, a successful guy who has somehow managed to live a long life despite the annoyances of his two whiny sons and their kids, a couple of even whinier, and less successful, siblings and various hangers-on, including the family’s longtime housekeeper.

Neither the show (basically a live-action sitcom) nor David’s performance as the cranky eldest son Norman (basically the same one-note dyspeptic shtick he does on his TV show) seem destined for any critical prizes but Fish in the Dark had people doubling over with laughter the night my friend Ann and I saw the show and it has become the biggest commercial hit of the spring Broadway season.

And that’s OK with me. Broadway should be a big tent and as long as a show is entertaining people with good quality stuff, I don't think everyone has to choose to enter the tent via the same door that I do. And for all its lowbrow daffiness, Fish in the Dark is a high-quality production.

The 18-member cast includes such stage MVPs as Rosie Perez, Jayne Houdyshell, Marylouise Burke, Lewis J. Stadlen and Jerry Adler, all masters at creating theatrical feasts no matter how meager the ingredients they’re given. And Rita Wilson and Ben Shenkman are on hand to lend support in the straight-man roles.

Anna D. Shapiro, the newly-named artistic director of the Steppenwolf Theatre who previously established her comedic bona fides with The Motherfucker with the Hat and August: Osage County, provides sure-handed guidance that abides by the golden rule of farce: keep ‘em moving.

Some naysayers might still complain that a show like this has no business being on Broadway and is just another example of how the business has gone star-crazy. But, of course, people have always wanted to see stars and when they’re being asked to shell out $100 or more for a ticket, they shouldn’t be made to feel bad for wanting to bask in a little starlight.

Besides, we seem to be adapting the British model in which actors go back and forth between the screen and the stage without much fuss. “Law & Order” used to be the only game in town for Broadway actors but they’ve been popping up increasingly in top-rated shows like “The Good Wife” and “Madam Secretary,” the now-departed “The Newsroom” and “Glee,” Netflix’s new Bloodline” and “The Slap,” which seems to be populated almost entirely by card-carrying members of Actors’ Equity.

The traffic is flowing the other way too. After finishing his run in "Glee," Matthew Morrison is returning to the stage in Finding Neverland, which opens on April 15. Similarly, after ending her time on “Mad Men,’ Elisabeth Moss is now starring in The Heidi Chronicles (click here to read my review).

And don't forget that after a 30-year career on TV, including five seasons of "Breaking Bad," Bryan Cranston won last year's Tony for Best Actor for his Broadway debut as LBJ in "All the Way."

Like "All the Way," nearly all of this season’s star-driven shows feature large casts, which means lots of jobs for lots of theater folks. It also means that more young people, like Molly Ranson, Jonny Orsini and Jake Cannavale in Fish in the Dark, are getting a chance to tighten up their Broadway chops.

So, I say welcome to Larry David and his Fish in the Dark. And the fact that it’s recently been announced that Jason Alexander, the Tony-winner who played David’s dyspeptic alter-ego George Costanza on “Seinfeld,” will be taking over the role of Norman from David in June should keep fans happy. And, who knows, it may even make Broadway traditionalists happier too.

Labels: Fish in the Dark