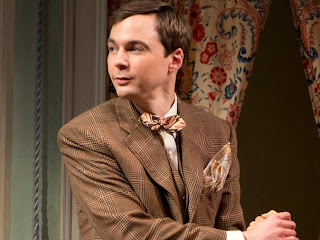 Summertime is tourist time in New York and one of the main things people want to do when they get here is see a Broadway show.  But not just any show.  Most want to take in a big Broadway musical, which is why 19 of the 27 shows now running are song and dance shows and three of the eight straight plays—End of the Rainbow, One Man, Two Guvnors and Peter and the Starcatcher—have so much music that they can pass. Even the soon-to-closed A Streetcar Named Desire has a dance number.

Since the majority of the out-of-towners will only see one or two shows, they want to be sure that they see the right ones. And that usually means shows that are familiar to them in some way. So they queue up for the mega hits their cousins saw (Phantom, War Horse, Wicked) and boasted about when they visited the city.  Or they choose shows whose music they already know (Jersey Boys and Rock of Ages).  Or they seek out ones based on favorite movies (which may be why the critically pilloried Ghost saw its tickets sales levitate 10% during the tourist-heavy July 4th week).

The tourists are willing to pay up to see familiar faces too.  Which probably explains why Harvey, a fey 68-year-old comedy about a man whose best friend is an imaginary 6 ft. rabbit, has been selling out at the Roundabout Theatre Company’s Studio 54.  For the actor playing Harvey’s buddy Elwood P. Dowd is Jim Parsons, the Emmy-winning star of the CBS sitcom “The Big Bang Theory.”  Audiences, at least the one at the performance my theatergoing buddy Bill and I attended, seem to adore Parsons.

Or maybe the show itself just has an appeal that escapes the rationalist in me. It’s another one of those whimsical stories that make the case that people who seem crazy are actually the most sane because they’re more in touch with what life is truly all about.

Harvey’s plot centers around an attempt by Elwood’s sister Veta to commit him to a mental institution so that his eccentric behavior, exacerbated by long, liquid afternoons at the local bar, will stop embarrassing her and her marriageable-age daughter. Hilarity is supposed to ensue when the commitment plan goes awry.

I’d seen—and been mildly amused by—excerpts from the 1950 movie with Jimmy Stewart as Elwood but I don’t think I ever watched the whole thing through and this was my first encounter with the stage version, which turned out to be too twee for me.

Yet, to my surprise, many of the critics were quite charmed by the production (click here to see a roundup of the reviews on StageGrade).  And their 1944 counterparts were just as enchanted when Harvey, directed by Antoinette Perry for whom the Tonys are named, originally opened with the vaudevillian Frank Fay playing Elwood.

The New Yorker declared that the production and Fay's performance were “touching, eloquent and lit with a fresh, surprising humor that has nothing to do with standard comedy formulas.” Apparently unable to express fully why he so loved Harvey, the unsigned critic finally resorted to saying, “You’ll just have to take my word for it, you’ll have the time of your life.”

Audiences back then apparently agreed because the show ran for over four years. Its playwright Mary Chase even won the Pulitzer Prize for Drama, beating out Tennessee Williams and The Glass Menagerie. I've tried to keep my lingering incredulity over that latter injustice from unduly affecting my response to the current revival.

So I fully acknowledged that director Scott Ellis has put together a handsome production (David Rockwell did the swanky sets and Jane Greenwood the cheeky costumes). And I'm happy that he’s cast it with dependable stage vets including Jessica Hecht as Veta (click here to read a piece about her), Charles Kimbrough as the head of the asylum, Tracee Chimo as the daughter and the always-welcomed Larry Bryggman as the lawyer who oversees Elwood’s financial affairs.

They all seem to be having a good time. Which is fine but I do wish they’d been willing to make the supporting characters a little less lovable so that the distinction between the world in which they live and the one in which Elwood does was sharper edged.

But no matter. As I said, the summertime audiences are turning out for Parsons.  And he gives a nicely calibrated performance (click here to read about how he put it together) that is totally pleasing to them and even somewhat appeasing to a jaded New York theatergoer like me.