"Dogfight" Aims for the Winner's Circle 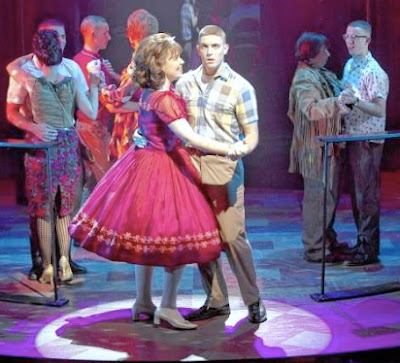 It would be hard to find a show with a more impressive pedigree than the one for Dogfight, the lovely little musical that opened at Second Stage Theatre on Monday night:

•Its director is Joe Mantello, the wiz who brought Wicked to the stage. Mantello has made some missteps since then (9 to 5, November, The Odd Couple) but he’s an ambidextrous showmaker, equally adept at big audience-pleasing musicals (Wicked) and intimate character-driven pieces (Other Desert Cities) and both skills are put to good use here.

•Its composer and lyricist Benj Pasek & Justin Paul may not yet be household names but the music they've produced for Dogfight shows why, still in their 20s, they’ve won just about every prize a talented young musical team can (The Richard Rodgers Award for Musical Theatre, The Jonathan Larson Award, the ASCAP Songwriters Fellowship Award, to name a few) and are scheduled to make their Broadway debut in November with A Christmas Story: The Musical!.

•Its star is Lindsay Mendez, a favorite in the theater community who has a powerhouse voice, has paid her dues off-Broadway, in the regional theaters and in the ensemble of Broadway shows like Godspell and Everyday Rapture and is finally getting her first shot at a leading role—and making the most of it.

•And, although it’s another movie-to-musical transfer, Dogfight is based on the small but beloved (at least by me) film that starred River Phoenix as Eddie Birdlace, a young Marine shipping out to Vietnam in 1963, and Lili Taylor, as Rose Fenny, the homely waitress he meets when he and his buddies engage in a cruel prank in which the one who brings the least attractive girl to a party wins a jackpot.

I remember being immensely touched by the bittersweet romance that eventually develops between the characters when I first saw the movie back in 1991 and I was moved again by this new stage version. That might be, in part, because book writer Peter Duchan sticks close to the storytelling of the movie script, including its rather abrupt ending.

But it also reflects the fact that Pasek and Paul have written tuneful songs that capture both the bravado and longing of the characters. They may be young but, like Joseph and David Zelnick, the brothers who wrote Yank!, (and when are we going to see it again?) Pasek and Paul are old-style songwriters and it’s easy to understand why lovers of old-fashioned musicals are so excited about them.

I confess I do wish that their songs in Dogfight distinguished themselves more from one another but each is fine in its own right, developing character, moving the plot along, unafraid of metaphor.

The staging is equally stylish but Mantello seems uncomfortable with how to portray the women that the marines disingenuously pick up for their party. Attitudes about the way we discus women’s looks have changed since the ‘60s (a girl in my high school was the victim of a dogfight-style contest) or even from the early ‘90s when the movie came out.

The production doesn’t seem to know whether it should portray the women as hideously ugly, goofily funny-looking or just plain-faced. And since the party scene is so key, that lack of clarity throws the first act off a bit.

But Mantello and his actors are spot-on when it comes to portraying the awkward love story that develops after Rose discovers why Eddie asked her out and he tries to make it up to her.

Derek Klena has the difficult job of making the audience care about a guy who’s initially a jerk and he pretty much pulls it off. But Mendez is the heart of the show. She brings a courageous honesty to Rose, who knows that she is no beauty and yet still blossoms.  (Click here to read an article in which the actress describes how she does it).

Meanwhile, choreographer Christopher Gattelli contributes dance numbers throughout that entertain without overwhelming the story: there are no showstoppers here, which may disappoint those who come expecting the kind of gymnastic routines that won Gattelli a Tony for Newsies, but the moves he's created for Dogfight fit this more intimate show.

Producers don’t assemble talent like this unless they’ve aiming for the kind of little-musical-that-could success that similarly small and eccentric shows like Next to Normal, Spring Awakening and Once managed to achieve. But that outcome may be more difficult for Dogfight, which doesn’t have the rock-flavored score of the first two or the emo quality and Oscar-anointed love anthem of the latter.

Even so, Dogfight is worth championing.  And so that's what I'm doing.