"The Best Man" is Still a Winning Ticket 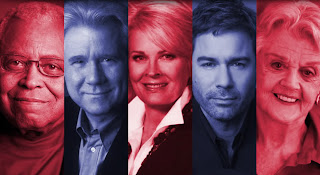 In keeping with this week’s red-white-and-blue theme, I’m going to recommend The Best Man (or Gore Vidal’s The Best Man, as it is officially billed) which is turning into a staple of election years—or at least of the most contentious ones.

Vidal’s unflinching look at the behind-the-scenes maneuvering between two main rivals for their party’s presidential nomination originally debuted right smack in the middle of the primary season for the 1960 campaign that eventually pitted Kennedy against Nixon.  It came back in the fall of 2000, when Bush and Gore were going at it. And now, as we head into the smackdown between Obama and Romney, we’ve got the nicely done revival that’s playing at the Gerald Schoenfeld Theatre.

The grandson of a senator and a relative through marriage of Jackie Kennedy (both their mothers were, at different times, married to the financier Hugh Auchincloss and they shared step-siblings) Vidal has long been a keen wit with pointed ideas about how the political game is played.

The way we choose a president has changed since the ‘60s but that doesn’t make his show any less engaging and it hasn’t stopped critics and audiences from drawing parallels to the current presidential derby.

The standard bearers in The Best Man are William Russell, a Brahmin with a smug over regard for his principles; Joe Cantwell, an up-and-comer whose surname betrays his willingness to do whatever it takes to get the nomination; and Arthur Hockstader, a former president who’s both a down-to-earth populist and a wily pragmatist.

The plot pivots around secrets in each candidate’s past that could scuttle his chances for the presidency and the question of whether either will use the dirt to sully the other.

Part of the fun is imagining which real-life politicians match those onstage. Depending on your politics at the time of the original production, you might have seen the characters as the Republicans Nelson Rockefeller, Richard Nixon and Dwight Eisenhower or the Democrats Adlai Stevenson, John F. Kennedy and Harry Truman.

Today, folks are citing both Obama and Romney as the overly-diffident Russell, Rick Santorum and Romney as Cantwell and, naturally, Bill Clinton as Hockstader.

But what’s really made the current production such a hit (and one of the few non-musicals scheduled to play through the summer season) is that so many of its actors are familiar faces. The opening night cast included  John Larroquette, Candice Bergen and Eric McCormack, all well known from popular TV shows, as well as those masters-of-all-media James Earl Jones and Angela Lansbury.

If you want to see these stars, you should stop reading this and run to the theater right now because, starting next week, several replacements are scheduled to move in. But I don’t think that will affect the show’s playability or popularity since the newbies will include the
famous in their own right Cybill Shepherd, John Stamos, Kristin Davis and Elizabeth Ashley. 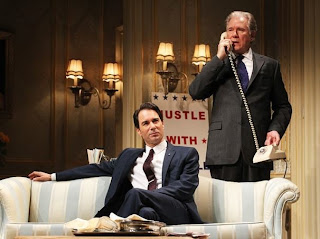 Larroquette is staying on as Russell. He may lack the patrician air
of his predecessors—Henry Fonda in the 1964 movie, Spalding Gray in the 2000 production
and Melvyn Douglas, who originated the role in 1960 and whose wife Helen was famously smeared by Nixon during his first run for the Senate)—but Larroquette still manages to make Russell believable as a man who might make a good leader if he can only figure out how to stomach the jostling it takes to get to the front of the pack.

And Larroquette’s co-stars were even better at the performance my friend Priscilla and I saw. McCormack who usually plays a nice guy seemed to have great fun as the slick Cantwell (click here to read a Q&A with the actor). And Bergen and Kerry Butler were equally convincing as the candidates’ shrewd and supportive wives. All are now leaving but Stamos, Shepherd and Davis seem like good fill-in choices.

Meanwhile, Lansbury and Jones were so adept at stealing every scene they were in that the non-traditional casting of a black man as a mid-century U.S. president, from the South no less, barely seemed odd at all and Jones’ performance, more supple than I’ve seen him be in a long while, won him a Tony nomination.

The ever-delightful Lansbury is handing her role as the chairman of the party’s women’s division over to Ashley who played the part in 2000 and was the best thing in that production. But Jones is sticking around through September when the show’s run is scheduled to end.

My personal favorites in the 20-member cast were Jefferson Mays who plays a sad sack who professes to have the lowdown on Cantwell’s past (click here to listen to an interview with him) and Michael McKean as Russell’s exasperated campaign manager (click here to read a piece about him).

Mays is staying with the production too.  McKean, alas, was struck by a car in May and although he’s recovering has been replaced by the veteran actor Mark Blum.

Director Michael Wilson and his design team have added lots of clever touches—video projections that suggest the media’s growing role in politics, turning the entire theater into a conventional hall, complete with bunting and campaign signs—and I’m willing to bet that even if you think you’re tired of politics, you’ll have a good time at The Best Man.

At the very least, it will be more enjoyable than the upcoming fall election, in which it's far from certain that the best man will win.

I loved The Best Man! It was just so entertaining. I couldn't believe how much this 50-year-old play felt like it could have been written today. And it made its points about the political system not by being preachy but through richly drawn characters.

McCormack's character reminded me of John Edwards - just the way he emphasized his humble roots and he has the hair! This was my first time seeing James Earl Jones onstage and I was awestruck. (I was in the second row so I was looking up at him.) His character seemed to be a transitional figure - he calls himself the last of the hicks. He's blunt and you know his kind of politician is giving way to the more slick and telegenic Cantwell.

I'm a history and politics junkie so it was right up my alley anyway and I've loved Gore Vidal's historical fiction going back to his novel Burr. I'd happily see The Best Man again four years from now!