The Real Pain of "Hurt Village" 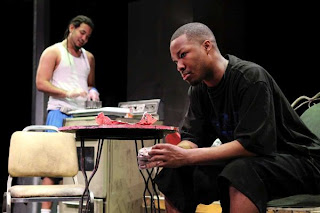 A bumper crop of talented young playwrights has popped up over the last few years.  Annie Baker, Tarell Alvin McCraney and Amy Herzog have all had plays produced by major companies, received deservedly good notices and even picked up a few awards along the way.  But none of them has received as effusive a welcome as has Katori Hall, whose Hurt Village opened at The Pershing Square Signature Center on Monday night.
Hall’s play The Mountaintop made her the first black woman to win the prestigious Olivier Award for best new play of a London season.  This past fall, that play, a fable about the last night of Martin Luther King, Jr.’s life, opened on Broadway with movie stars Samuel L. Jackson and Angela Bassett, prompting the New Yorker magazine to run a five-page profile of its young author (click here to read it).
And Hall, who just turned 30 last May, has won a slew of other honors including the Lorraine Hansberry Award for a play that best expresses the African-American experience and the Susan Smith Blackburn Prize for the best work by a woman in the English-speaking theatre.  Now, Hall is joining Edward Albee and Athold Fugard as a playwright-in-residence during Signature’s inaugural season in its new home.
But after having seen The Mountaintop (click here to read my review) and now Hurt Village, I’m wondering if all the accolades may be premature. To be fair, Hurt Village seems to have been written as a class project while Hall was still studying playwriting at Juilliard.  But while both plays have a lot of swagger, they are bantamweight fare that fail to pack a real punch.
Like The Mountaintop, Hurt Village is set in Hall’s hometown of Memphis. It centers around a real-life housing project and the lives of some fictional characters living there right before the buildings were demolished in 2002.
To say that the lives of Hall’s characters are hard would be an understatement.  They’re plagued by every cliché in the ghetto-life handbook: drugs, teen pregnancies, illiteracy, obesity, welfare dependency and a seeming inability to speak even one sentence without uttering at least two profanities.
Don’t get me wrong, these are real issues and there are real people throughout the country struggling mightily to overcome them. But while Hall vividly lays out the problems, she shortchanges the people.
The main character in her play is Buggy, a twentysomething year-old soldier who has returned home from the Iraq War under mysterious circumstances. He wants to do right by the grandmother who raised him after his mother’s death and the teen-daughter he sired when he was no more than a boy himself.
The women have aspirations too. The mother labors as a health aide trying to save up the money to move the family to a decent neighborhood. The precocious daughter wants to be a poet.  Even Buggy's baby mama, a recovering addict, dreams of owning her own beauty parlor.
But they're all pulled down by the street life that has already trapped so many others around them and by a bureaucracy that doesn't care. There’s undeniable poignancy in their plight but similarly sad stories have been told before. And unlike works like McCraney's Brother/Sister plays or Kirsten Greenidge's Milk Like Sugar which recently played at Playwrights Horizons, Hurt Village doesn't offer any new insights that help us to see its characters as distinctive people rather than as mere avatars of misery.
Patricia McGregor’s direction also goes for the flamboyant. She uses loud music and video projections to signal scene changes. Some scenes are performed in rap (good luck trying to understand the lyrics). And there’s a gratuitous scene in which one poor actor has to vomit on the stage and the others have to try to avoid the mess while they continued to perform.
The cast, filled with young actors, is uneven. The old-timers Ron Cephas Jones and Tonya Pinkins come off best but it’s sad to see Jones playing yet another wily drug dealer and Pinkins, padded in a fat suit, another dysfunctional mother, particularly after she just played one in Milk Like Sugar (click here to read an interview with her).
Complimentary reviews for Hurt Village have been filled with phrases like “eloquent explorations of tragedy and hope” and "raw, haunting and crackling."  But I can’t help feeling that those words reflect a misguided belief that this is truly the way that poor black people live and act.

Some do, of course.  But even the most downtrodden of them possess a layered humanity.  Perhaps, once all the hoopla dies down, Hall will have the time to mature her craft and, in her future works, will dig deeper than the one dimension now on display in Hurt Village.